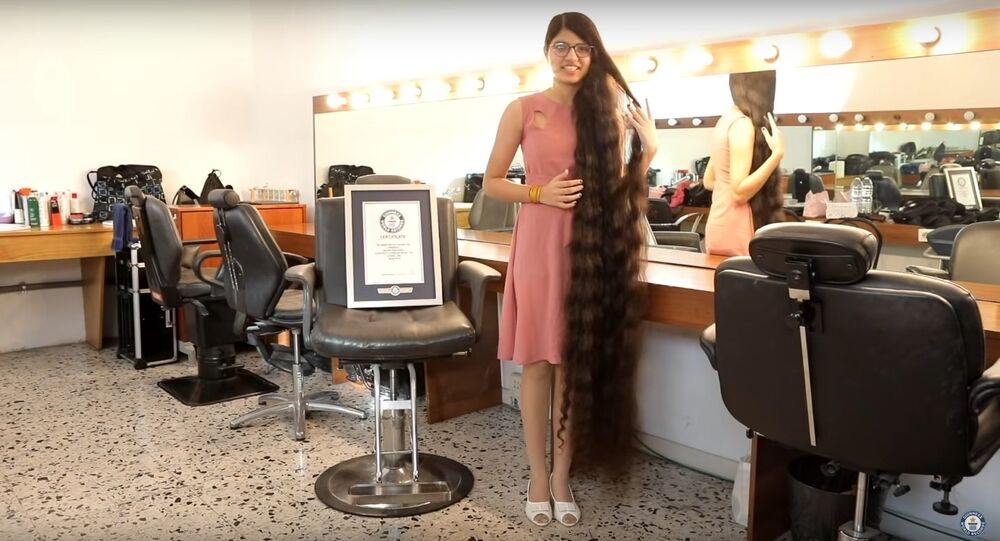 In a country where the average male height is estimated to be around 5 foot 5 inches, an Indian girl is making headlines for her hair, which measure 5 foot 7 inches.

New Delhi (Sputnik) — An Indian girl, Nilanshi Patel, has gained entry into the Guinness World Record list for having the longest hair in the world. The World Records registering body uploaded a video interview of the teenage girl on its official YouTube channel to announce the impressive feat.

© Photo : YouTube/Guinness World Records
Indian Man Poses as Brand New Nutcracker, Setting New Guinness Record
Further information of the record-holder published in Gujarat ‘s local daily, Sandesh, reveals that she had a bad experience with hair cutting when she was ten years old. She did not allow her parents to cut her hair thereafter and this record was achieved after six years of growth; she is just 16 years old.

Hair experts say she can still better her record.

"Hormonal changes may have some disturbance in the growth pattern but she still can increase the length of her hair if she continues to take care of the hair the way she has been doing," Tupa Chakraborty, a hair expert practicing in Delhi's Palam Vihar and specialised in hair fall treatment, told Sputnik.

In an interview with the local daily, Patel revealed that she washes her hair once a week and her mother helps her braid and manage it. Furthermore, in another interview, she revealed that she is a keen table tennis player and her hair-growing passion has never got in her way.

Before Patel, the record was held for a short period by 17-year-old Argentinian resident Abril Lorenzzati. The record for the longest hair on a woman's head is held  by China's Xie Quiping, whose hair is 18 ft 5.54 long.