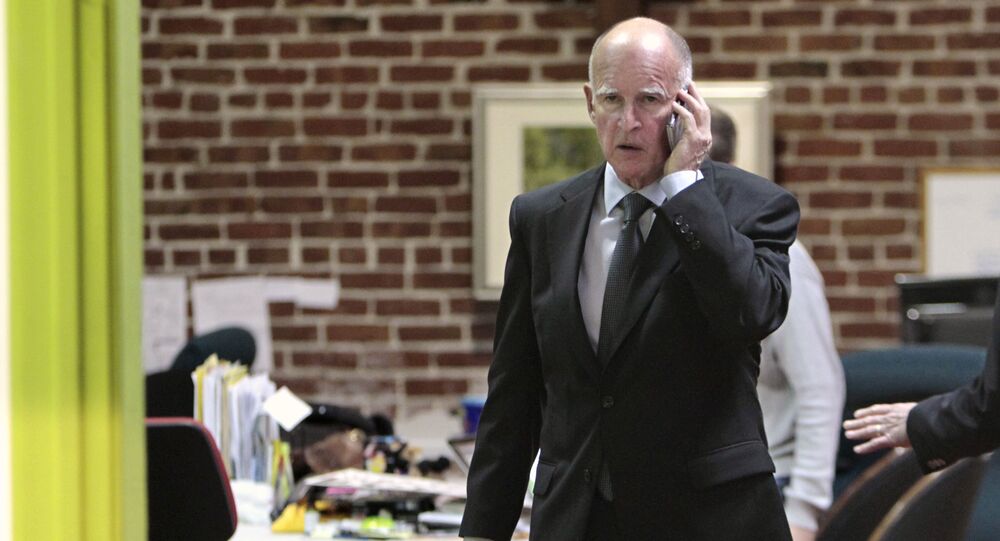 Outgoing California Governor Jerry Brown became the latest target of Vladimir 'Vovan' Kuznetsov and Alexei 'Lexus' Stolyarov, a pair of Russian comedians known for their antics involving prank phone calls to politicians from around the world.

Posing as Ukrainian Prime Minister Volodymyr Groysman and Ukrainian Ambassador to the US Valery Chaly, the pranksters asked the governor whether he believed that Russia meddled in the recent mid-term elections in California.

"Look, today's cyber capability is extraordinary, and individuals and countries can certainly launch informational assaults in various ways. If you're asking me whether I think the Russians affect the election, they may have tried; there's evidence that can be weighed. But the elections in America I think are being driven by domestic actors, by politicians, Republicans, Democrats, by media, Fox News, by corporations that spend money, by many, many factors. And from the evidence I've seen, any impact of Russia is very, very small. That isn't to say that they might not have intentions to do something, but the impact is minimal," Brown replied.

'Chaly' asked Brown about Ukrainian President Petro Poroshenko's upcoming visit to California. "I look forward to a visit from President Poroshenko, and we might continue our conversation that we started in Kiev," the governor said, referring to his own 2016 visit to Ukraine.

Asked whether it might be possible to put Poroshenko's star on the Hollywood Walk of Fame, Brown became hesitant. "I don't know about that. That sidewalk belongs to an organization that is not under my control, but we could explore that. I doubt that they would do that, that's more for movie stars. Unless your president wants to try out for a movie," he quipped.

© AFP 2020 / Frederick Florin
Russian Pranksters' Call With Juncker Reveals What EU Chief Thinks About Trump
The fake 'Chaly' interrupted, cheekily suggesting that Poroshenko has already starred in movies in Ukraine, including 'Maldives Vacation' and 'Petro of Panama', referring to media investigations into the president's secret vacation in the Maldives, and his alleged offshore firms, which were uncovered in the Panama Papers in 2016.

"Wow, I didn't know that! There's much to learn here," Brown exclaimed.

The conversation also included more serious issues, including the state of relations between Ukraine and Russia. "I also think it's important that Trump and Putin meet and frankly discuss issues. We have thousands of nuclear warheads and there can be mistakes or blunders made that would create utter horror for everyone. So I don't want to minimize the importance of high-level negotiations," Brown said.

Asked by 'Groysman' whether he really planned to leave politics for good in January, Brown answered that he had. "But don't worry, I will be around in one form or another for many years," he said.

The pranksters claimed that Poroshenko had offered Brown the post of governor of the Vinnitsa region in Ukraine. "Well that's something we can talk about. Thank you very much! I would want to understand what you're saying with a little more detail," Brown said. "That's another item on our list of subjects to be discussed when President Poroshenko arrives," he reiterated after being told how tough the job would be.

© AP Photo / Virginia Mayo
'We Thought He'd Be More Expressive': Russian Prankster on Fooling UK FM Johnson
The full audio of Brown's conversation with Vovan and Lexus can be found here. The governor has not commented on the prank call, and its authenticity has yet to be confirmed.

Vovan and Lexus have pranked many politicians, stars and public figures over the years. Earlier this year, they reportedly got European Commission President Jean-Claude Juncker to express his true feelings about President Trump. Before that, they tricked a senior Ukrainian official into a 40-minute conversation with a telephone recording. They've also trolled former US ambassador to the UN Nikki Haley, Congresswoman Maxine Waters, and even Petro Poroshenko.