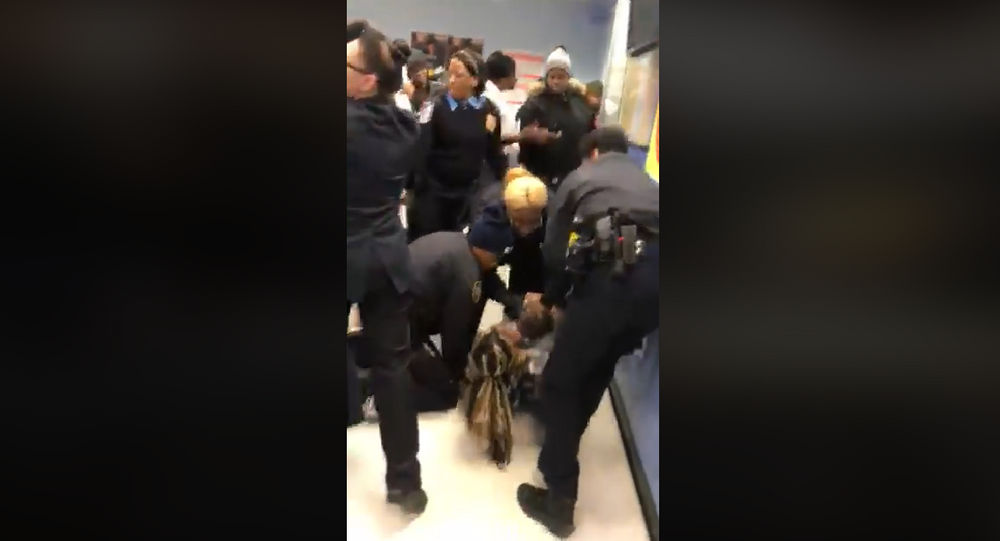 The New York Police Department (NYPD) is currently investigating footage of an incident in which police officers dragged a 23-year-old mother across the floor of a social services building in New York City and eventually pull her one-year-old baby from her arms.

The video, which was uploaded by bystander Monae Sinclair on Facebook Friday and has been viewed at least 238,000 times, shows Jazmine Headley clutching her son as she lies on the floor of a social services office in Brooklyn, New York, yelling, "They are hurting my son!" as officers try to yank her child from her arms.

"I'd like to understand what transpired and how these officers or the NYPD justifies this," he noted.

In a Sunday statement on Facebook, State Attorney General-elect Letitia James, who currently serves at New York City's public advocate, called the police officers' actions "appalling and contemptible," calling for an investigation of the incident.

"Being poor is not a crime… A full investigation must be conducted immediately, and the results should be made public so there is a transparent accounting of how this horrific situation occurred.

All involved officers, including the assigned supervisor, should be assigned desk duty pending the investigation results. No mother should have to experience the trauma and humiliation we all witnessed in this video," she added.

"Video images of the incident in the 84th precinct are troubling, and the event is under review by the NYPD and Human Resources Administration (HRA) Police," an NYPD spokesperson recently told the New York Daily News. "This review will include examination of all available video of the incident."

According to the spokesperson, police were called to the social services office in Boerum Hill, Brooklyn, on Friday, just before 1 p.m. "due to [Headley's] disorderly conduct towards others, and for obstructing the hallway," the New York Daily News reported Sunday.

"The woman was then informed by police numerous times to leave the location, and she refused," the unidentified spokesperson added. "NYPD officers then attempted to place her under arrest." At one point during the video, an officer is seen pulling out a taser.

According to Sinclair, who shared the video on Facebook but did not immediately respond to Sputnik's request for comment, Headley was waiting to get a voucher for city-funded day care and was simply trying to sit on the floor because there weren't enough chairs. Her desire to sit down resulted in a verbal altercation with a security guard.

"The security guard felt dumb so she called the cops on her, and this was the outcome," Sinclair wrote. "Mind you she had her baby in her hands the whole time."

"I'm so f***ing disgusted with the NYPD," Sinclair added. "I'm a mother myself, and I would've lost my f***ing mind if this was me. They would've had to kill me."

Headley was eventually charged with resisting arrest, acting in a manner injurious to a child, obstructing governmental administration and trespassing, according to officials, the New York Daily News reported. A family member has taken custody of Headley's son, and the Administration for Children's Services was made aware of the incident, according to the NYPD.

The NYPD did not immediately respond to Sputnik's request for comment.