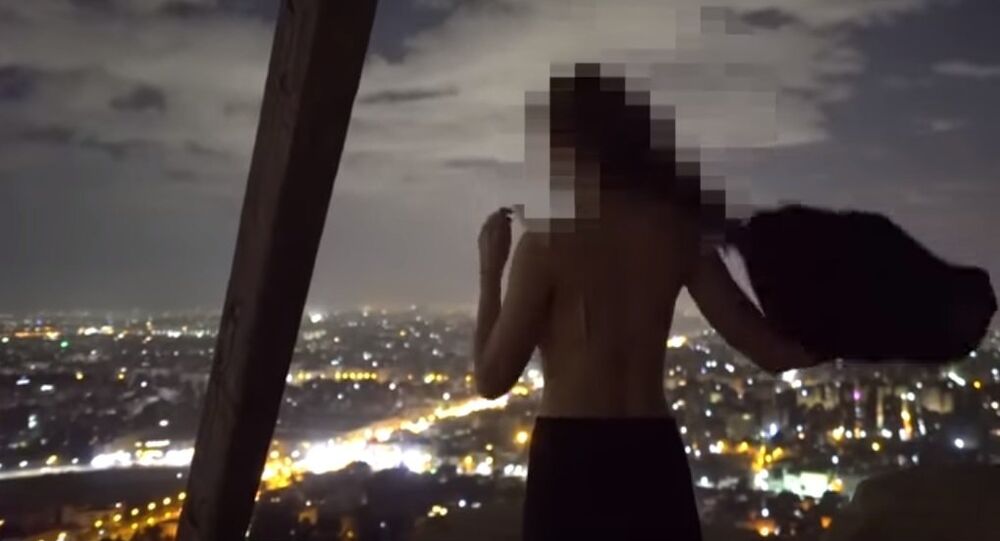 While Egyptian authorities are already investigating the spicy adventure, the Danish naked art enthusiast himself has admitted that having a "nude shoot" was the dumbest thing he could think of.

A video involving a Danish couple going at it on top of the Cheops pyramid has sparked the interest of Egyptian authorities and stern condemnation from ordinary Egyptians.

The relatively harmlessly called video "Climbing the Great Pyramid of Giza" features a Danish couple making it to the top of Egypt's arguably most recognisable sight.

Having reached the top after a laborious climb, they celebrated their feat with a cigarette. However, it was not the smoking that caught the public's attention. Nor was it the fact that getting to the pyramid area at night is illegal, while climbing the pyramids is prohibited altogether — but what happened next.

At the end of the video, the woman, her face pixelised, removes her top, leaving her wearing only a bra. The original video concluded with a snapshot of the couple getting it on with Cairo's glowing cityscape in the background, something which photographer Andreas Hvid dubbed "pyramid f**k". After being removed, the video has since been uploaded again, but without the raunchy still image, which is still present on Hvid's homepage.

"For many years, I have dreamed of climbing the great pyramid. The idea of having a nude shoot up there has also been around for a few years", 23-year-old Hvid told the Danish tabloid daily Extra Bladet.

The Danish photographer is known for his daring exploits at dizzying heights, climbing famous buildings and landmarks and documenting everything on film. He is also a nude art afficionado, as his pictures and clips often show naked women and men in unusual places, which falls into categories "rooftopping" and "urban exploration".

"With my camera, I've perpetuated my climbs to various high rise buildings in Hong Kong, Bangkok and Eastern Europe's abandoned, decayed Soviet relics, as well as an illegal trip to the Chernobyl zone in Ukraine", Hvid boasts on his website.

None of his previous feats, however, provoked as strong a reaction, as his Cheops pyramid session.

The Egyptian Ministry of Antiquities requires a thorough investigation of the incident. In a press release, the ministry claimed the video violated "public morality".

Giza pyramid director, Ashraf Mohi, pledged an investigation to establish the authenticity of the video. According to him, the penalty will depend on whether the sex stunt led to any damage to the pyramid.

By contrast, archaeologist Zahi Hawass was "100 percent sure" that the image was photoshopped, as the area is well guarded at night and the stones in the sex scene are too small to originate from the real pyramid.

His compatriots were not as understanding, however. "You and your bitch are no longer welcome in Egypt", a typical tell-tale comment said. Even Hvid's Danish compatriots were angry. "You are an idiot. To piss on a country's culture and history. You should rot in prison", a Danish user wrote.

According to Hvid, the video and the pictures were taken in late November this year. The climb itself took about 25 minutes, he said, recalling a "feeling of euphoria". Nevertheless, he insisted that they never had actual sex on top and that it was merely a "shoot". He also stressed that he had received a lot of positive feedback from Egyptians".

"'Pyramid f**k' was the dumbest idea I could get. Western, privileged youth at its worst. All that is missing is a joint and a bottle of vodka", Andreas Hvid said, assuring that he never meant to provoke an international scandal like the 2005 Muhammad cartoons controversy.

To prove that Egyptian authorities are not joking, Egyptian actress Rania Youssef recently faced up to five years in prison for public obscenity after wearing a see-through dress at the Cairo International Film Festival. Eventually, the charges were dropped, but not before she made a public apology for her attire.