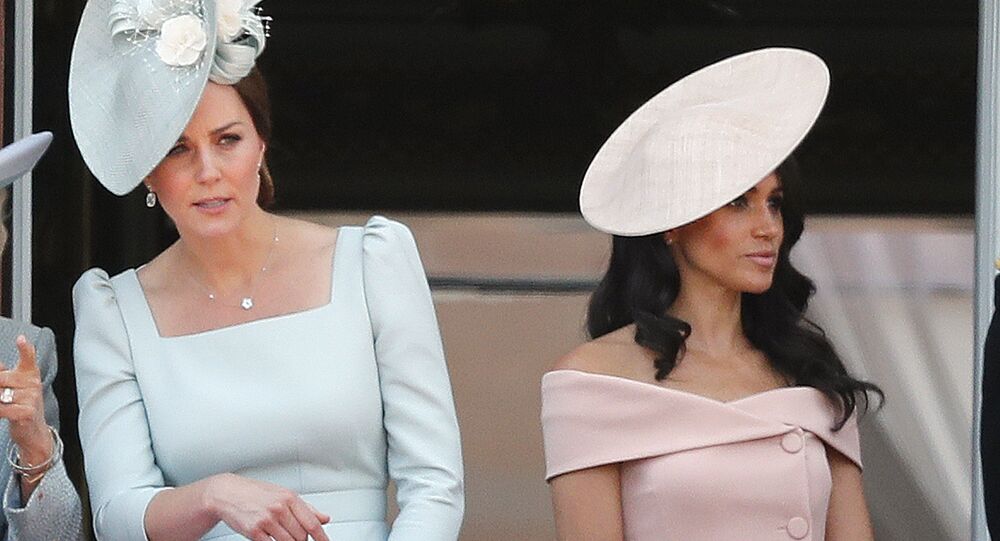 A spate of leaks has heated up speculation about the rumoured rift escalating between Harry and William because of the uneasy relations between their wives, Meghan and Kate. The reported real-life drama show has prompted a storm on social media and caught the attention of Michelle Obama, who rushed with her advice.

The recent reports about the Duke and Duchess of Cambridge, William and Kate, spending Christmas away from the Duke and Duchess of Sussex, Harry and Meghan, has triggered debates over the rumoured row between the two royal couples. Although Daily Mail has already dismissed earlier speculations and claimed that both would still join Queen Elizabeth at Sandringham, Norfolk, for traditional celebration this year, the topic was too tempting for netizens to let it go.

The hashtag #MyPalaceSource is trending on Twitter as users come up with their ideas what’s behind the rumoured rift and mock the British tabloids’ recent headlines.

#MyPalaceSource tells me that the feud started because Kate told Meghan that there was no need to read the briefing books about upcoming royal engagements because all a duchess has to do is “stand there and look pretty” and Meghan laughed at her. pic.twitter.com/KiOei25tOP

#mypalacesource said Kate was going to call the police on Meghan but the Queen told her Meghan belonged there too. pic.twitter.com/QZEkBXHr4e

#MyPalaceSource tells me that Harry & Meghan are breaking protocol by having a loving and mutually respectful marriage; palace aides are worried that certain others might start to get ideas. pic.twitter.com/ZzmTrWmEU0

#MyPalaceSource tells me #HurricaneMeghan is resting up and will return stronger than ever.

You haven't seen the likes of it. pic.twitter.com/YrqkeSUT7R

#MyPalaceSource sent me this footage of Meghan waking up her aides. They're all crying and quitting now. pic.twitter.com/sSomcYBZMu

​Apart from regular folks on Twitter, a half of another world-famous power couple has also had her say. Michelle Obama has sided with former US actress Meghan Markle, who married into the royal family this May, and advised her “to take some time and don’t be in a hurry to do anything.”

“Like me, Meghan probably never dreamt that she’d have a life like this, and the pressure you feel – from yourself and from others – can sometimes feel like a lot…What I’d say is that there’s so much opportunity to do good with a platform like that – and I think Meghan can maximise her impact for others, as well her own happiness, if she’s doing something that resonates with her personally,” she said to the British outlet Good Housekeeping.

Late in November a series of publications in the British tabloids, citing insiders close to the Royal family, had suggested the two princes, who used to be very close, are drifting apart because of the escalating rift between their wives.

First Kensington Palace, representing the royal couple, announced that the Duke and Duchess of Sussex, who have a baby on the way, are to leave Kensington Palace, which they now share with Harry’s elder brother’s family, early next year while The Sun reported that they “don’t want to live next to William and Kate.”

Then, The Daily Telegraph reported that Meghan left her sister-in-law weeping over her demands regarding Princess Charlotte’s dress for the May wedding.

Moreover, reports emerged that the spat began long before the wedding, namely last Christmas. The Mail on Sunday, sighting its insiders Meghan complained to her then-fiancé that she didn’t feel completely welcome by all the members of the family. Her father-in-law, Prince Charles was reported to have tried to smooth things out with a family gathering but failed as Harry’s future wife was perceived as “downright rude.”
“Kate had a quiet word with Meghan. It escalated rapidly after Meghan complained to Harry that she had been “told off”. He took her side, while William defended Kate, who was five months pregnant with Louis and certainly didn’t want this sort of confrontation,” the unnamed aide said, as cited by the media.

Besides, Meghan Markle was reported to have been sharp with her staff at Kensington Palace as some leaks suggested she “bombarded” them with early morning emails and calls as well as reduced her personal assistant to tears and led to her resigning. As The Sun claimed, even before the wedding, Kate allegedly confronted Meghan on the matter, telling her “That’s unacceptable, they’re my staff and I speak to them.” However, none of the leaks have been confirmed by Kensington Palace.