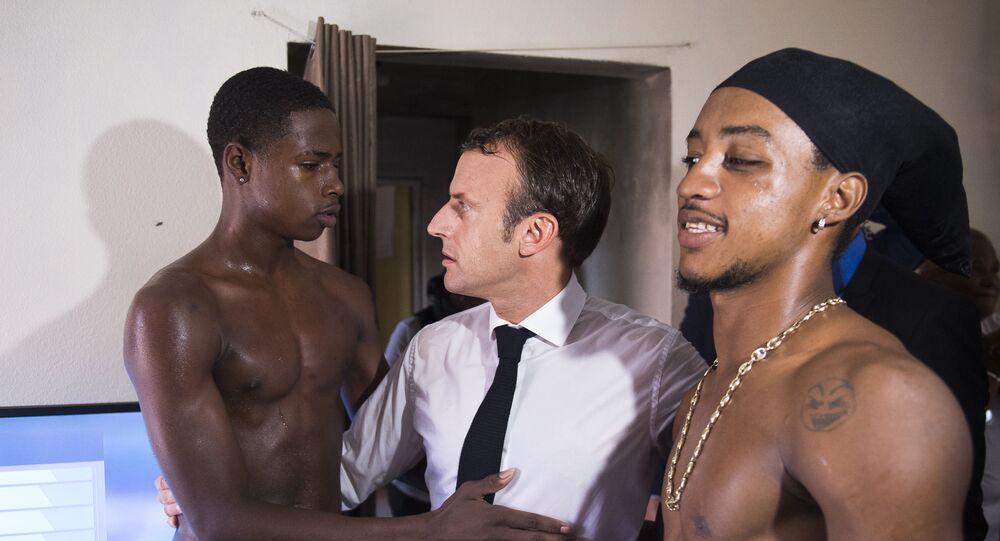 The much-hyped photo of French President Emmanuel Macron posing with two bare-chested young men during his September trip to the island of Saint Martin is back in the spotlight.

Social media users have revealed that the infamous picture of President Emmanuel Macron happily smiling next to a reported drug dealer and a middle finger-giving resident of Saint Martin is being censored on Facebook for violating the network’s rules against ‘nudity and sexual activity’.

TWEET: ‘Imagine this: my post from 30 September with this photograph of #Macron was censored by #Facebook. My comment was: "Funny way to celebrate the 60th anniversary of the Fifth Republic". Reason: nudity! These people are crazy’.

The censorship did not affect only France, a number of users from abroad had faced the same ‘problem’:

How funny: this pic I uploaded on facebook 2 months ago of Macron with a bare chested thug got removed because "showing nudity"… #Macron #censorship pic.twitter.com/NfLrrGcKAL

So #Facebook removed this post entirely after I asked to verify their decision to censor the #Macron with thug photo. It's an evil company with a political agenda! Well, If I can't say what I want I won't say anything no more on their stupid platform! #censorship #1984 pic.twitter.com/F2TYYi6Mmt

And posting sexually explicit pictures of Macron and his black thug friends… pic.twitter.com/x9DX7acEdb

Now Facebook has reviewed this photo, and apparently they are either calling that handsome criminal a woman or that Macron is having sex with him. Really? pic.twitter.com/HNAyVHyQ57

According to Facebook, this is a photo of Macron engaging in indecent sexual activity, the type that violates their community standards. pic.twitter.com/bDgVKegQIB

© AP Photo / Thibault Camus
'Madame Macron!' Angela Merkel Taken for France's First Lady at Armistice Event (VIDEO)
The controversial picture was taken two months ago when Macron was on tour of Saint Martin to inspect reconstruction work after the Caribbean island was hit by hurricanes Irma and Maria last year.

The pic drew much criticism due to the fact that the two locals were posing shirtless with the president, and one of them confessed to being a thief, who had just been released from prison; while the other was flipping the bird at the cameras.

Just a few days later, the bandanna-wearing ex-robber was reportedly sentenced to eight months in prison for possession of drugs and resisting arrest.