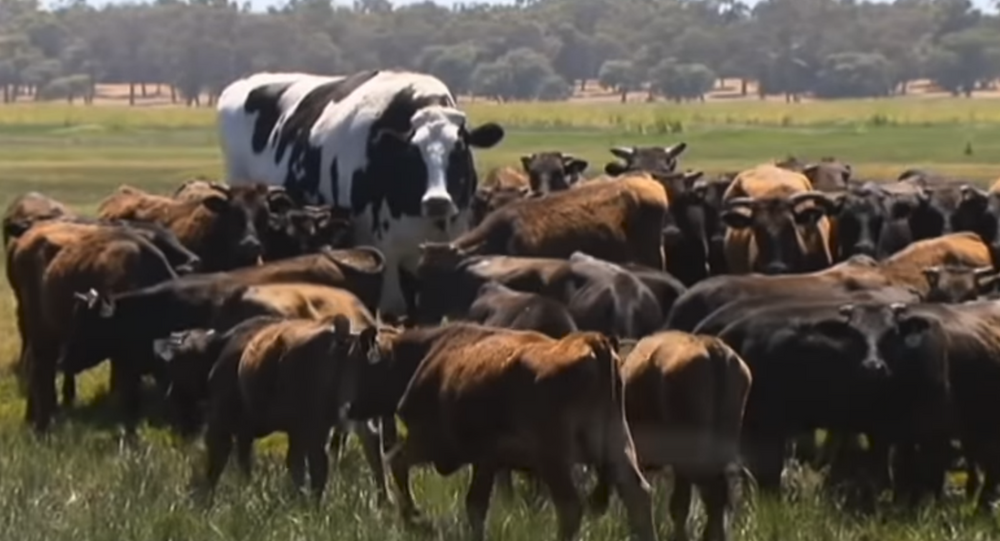 A black-and-white Holstein Friesian cow has won over the hearts of many on social media recently, but not because of his friendly vibe, folks. It's all got to do with his jaw-dropping looks.

Knickers the cow, hailing from Lake Preston, Australia, stands at 6 feet, 4 inches, making him the tallest steer in the country, according to local media outlets. And what's even more heartwarming, one might say, is that this bodacious bovine's appearance is what ultimately saved him from the slaughterhouse.

Although it's estimated that Knickers, who tips the scales at 1,400 kilograms (3,086 pounds), could provide burger-lovers with more than 4,000 patties, owner Geoff Pearson told the Australia Broadcasting Corporation (ABC) this week that Knickers was destined for other things, as he turned out to be too large for any meat processing plant to handle.

​"He was too big to go into the export plant's chain," Pearson told the Australian outlet. "We have a high turnover of cattle, and he was lucky enough to stay behind."

In the days since getting his golden ticket, this seven-year-old full-bodied fella isn't just mooing around. In fact, he's helping Pearson out on the Lake Preston farm by coaching and herding other cattle.

"You'll put him in a paddock, and all the other cattle seem to get attracted to him," Pearson said. "Whenever he wants to get up and start walking, there's a trail of hundreds of cattle following him."

"We all know when Knickers is on the move," he added.

Basking in the glory that is Knickers the cow, netizens have gone off the deep end, professing their love and general sense of shock over the giant steer.

​Pearson later told the BBC that Knickers got his name as a result of his friendship with another cow named "Bra."

"When he was young, when we first got him, we had a Brahman steer [a breed of cattle] which was a friend of his," Pearson explained to the publication. "So his name was Bra… so we [had] Bra and Knickers."

"We never thought he would turn into a big knickers."

Per the Guinness World Records, the tallest living steer is Bellino, an Italian Chianina ox who stands at 6 feet, 7 inches.