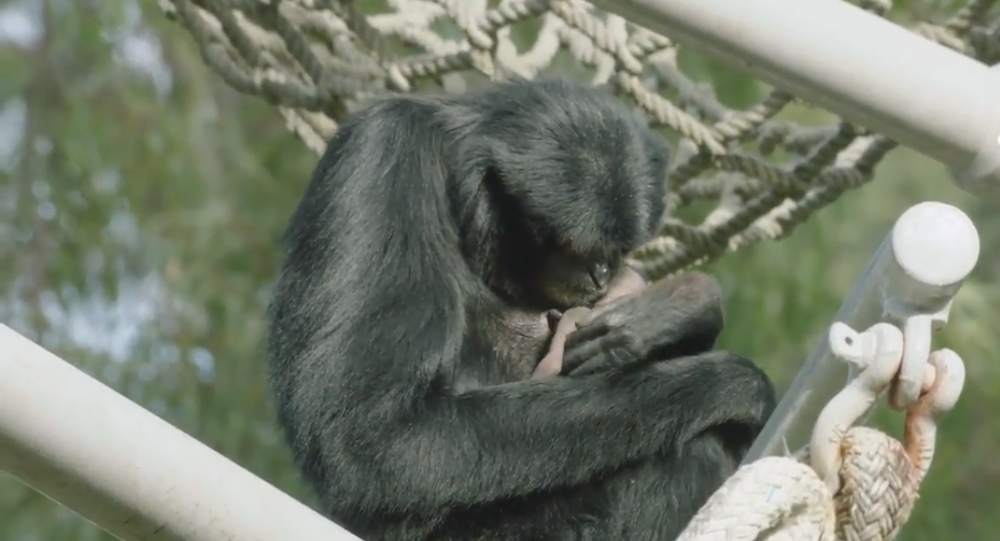 A female ape and her mate welcomed a seventh baby to the San Diego Zoo, despite the mother routinely receiving chemical contraception and showing no visible signs of pregnancy to the facility’s employees.

Eloise the siamang gibbon and her mate Unkie unexpectedly expanded their family on November 12 when the 37-year-old gave birth to the first newborn siamang the San Diego Zoo has seen in over 12 years, according to a press release.

Due to the duo's genes being "already well represented in the zoo siamang population," Eloise was forced to receive routine birth control as part of their Species Survival Program (SSP). While the contraception is said to have worked successfully in pregnancy prevention for a number of years, its failure came as nothing short of a shock to those tasked with caring for the siamangs.

"We're not certain why birth control didn't work in this case, but as with humans, it is not uncommon for contraceptive failure to happen from time to time." Jill Andrews, San Diego Zoo animal care manager, expressed in the sanctuary's release.

The baby's arrival came as even more of a shock because Eloise reportedly "showed no outward signs of being pregnant." Officials are nonetheless elated by the youngster's presence.

While the two gibbons' genes runneth over by SSP standards, siamangs remain endangered (as are all gibbon species) due to habitat loss brought about by logging and agriculture. In addition, the killing of adults in order to nab their offspring for the illegal pet trade is yet another reason it's rare for a siamang gibbon to make it past 25-30 years of age in the wild.

Those itching to know the baby's gender and more information about its health will unfortunately have to wait a few weeks until the young gibbon receives its first full exam. One can, however, keep up with Eloise, Unkie and many more primates through the zoo's "ape cam."