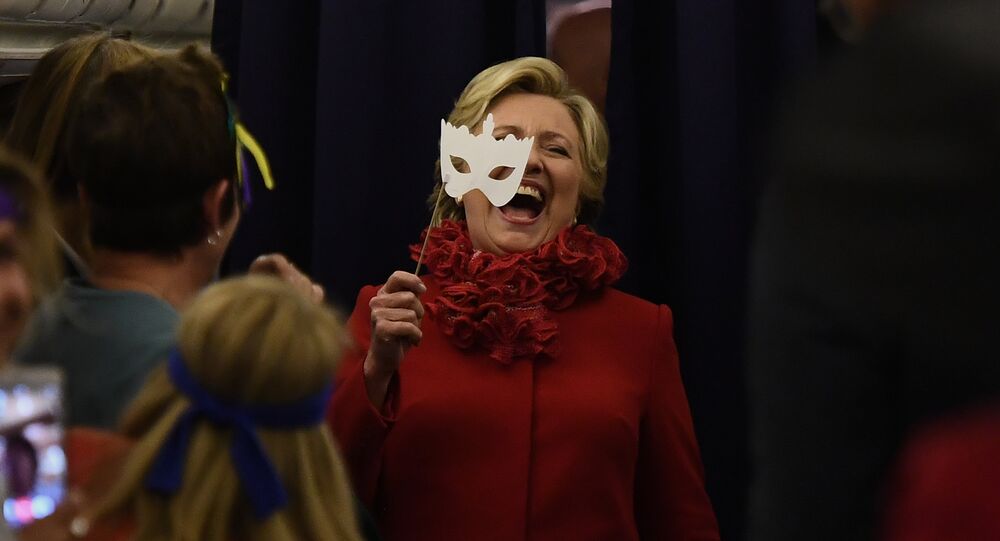 The conservative US 24-hour news network issued a formal apology to the former secretary of state after a guest compared her to the common sexually transmitted disease.

Speaking to his audience on Thursday, Fox News anchor Arthel Neville issued a direct apology to Mrs. Clinton, telling her that a guest's inflammatory remarks were completely inappropriate. "We are all Americans, and that is the focus and we want to reiterate that we do not condone the language that Anna Paulina just displayed here, and we apologise to (former) Secretary Clinton for that," she said. "Fox News does not condone her sentiments," she added.

In an earlier segment, speaking to anchor Rich Leventhal, Paulina commented on her 'amazement' that Clinton continues to appear in the news with an inappropriate analogy, quipping that she "won't go away, she's like herpes."

© Sputnik / Andrey Stenin
Remember Gaddafi? Hillary Clinton Shamed for Libya Intervention as She Schools EU on Migrant Crisis
Leventhal immediately cut Paulina off and apologised to viewers for her remarks, which he said were inappropriate. "We are going to wrap this segment up a little bit early because of the language that was used in the segment, and we apologise to our viewers for that," he later said.

Social media users instantly divided along party and political correctness lines over Paulina's remarks. Many, including pro-Trump Republicans and Democrats alike, shamed her for the comments, or praised Fox News for shutting her down.

@realannapaulina https://t.co/uGLfGRyZjm
Goes to show, you don't have to be BLONDE… to have a moment! Me being a @realDonaldTrump supporter, what were you thinking?

Good for Fox News. The guest’s comment was disgusting.

The host cut her off immediately which is good.

Some weren't as eager to condemn the Clinton-basher, however, saying they weren't offended and "appreciated a moment of #humanity and #humour" made in the off-colour analogy. Others still accused Fox of bias, saying that among the liberal anti-Trump networks, similar comments directed at the president would be praised, not reprimanded.

#hilaryclinton #FoxNews #HappyThanksgiving2018 @FoxNews FYI I was not offended and appreciated a moment of #humanity and #humor. the clintons have been headline news since the 90s — we are tired of it. Prosecute and get done with it. @realannapaulina #facts #herpes pic.twitter.com/YFbyRz2K7m

I know it's Thanksgiving but damn. I couldn't help but laugh. I thought it was a fair comparison. https://t.co/gMGTzyCWeK

Truth to that statement. She painful to listen and look at. She wont go away, and she keepa coming back. How is that comparison wrong?

Finally, many took a more 'comedic' approach, claiming that Paulina's offensive comment was really "a compliment," or arguing that she should have directed the comments at Bill Clinton, who has been accused of sexual misconduct throughout much of his career.

Actually, that moron doesn’t realize that it was a compliment. The herpes virus is multi-faceted,extremely persistent and indestructible. Like Hillary.

This would only make sense if you apologized to herpes. https://t.co/NbrepyBHCK

That’s Fake News everybody knows Bill is the Clinton with the herpes!!!!

House Republicans to Have Hearing on Hillary Clinton's Foundation Investigation