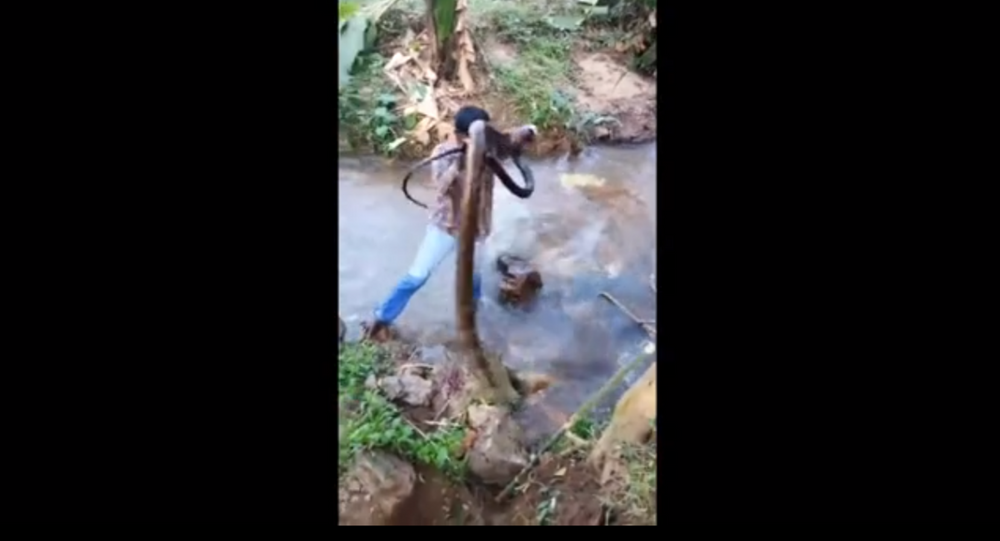 A video of a snake expert rescuing a huge king cobra - estimated to be 4.5 meters long - from a stream in Kerala, India, has gone viral.

On November 4, Villagers in Thiruvananthapuram, Kerala, spotted the venomous snake in the village and called local snake expert Vava Suresh to remove it. By the time Suresh had arrived, the massive snake had already made its way into the stream.

​Footage shared online shows Suresh entering the stream, grabbing the snake by the tail and dragging it ashore as a group of people gather to watch in awe. After pulling the snake out of the water, Suresh released the cobra into the forest. According to Asia Times, it was the 150th king cobra he had rescued and released into the forest.

The king cobra is native to many parts of India and is the world's longest venomous snake.

Although not typically aggressive in nature, preferring to escape from threats, the king cobra's bite delivers a dose of neurotoxin that is one of the most potent snake venoms in the world. A bite can even be fatal to an elephant.

According to the American Society of Tropical Medicine and Hygiene, approximately 46,000 people in India die of snake bites yearly, particularly due to the absence of antidote in rural areas.

WATCH: Amateur Snake Rescuer Escapes with Life After Being Bitten

Two Heads Not Better Than One: Double-Headed Snake Shocks Internet

WATCH Pastor Being Bitten by Deadly Snake During Church Ritual