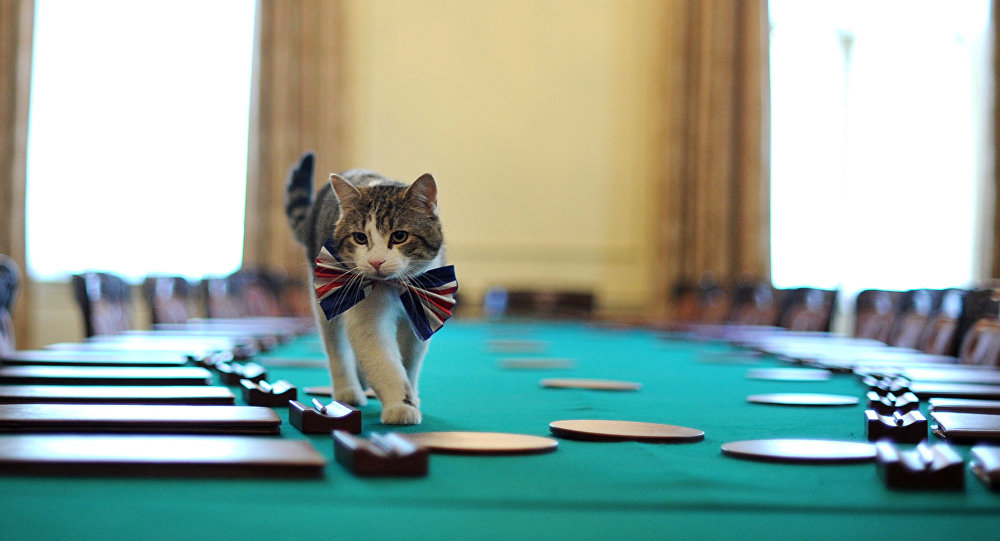 Larry, 10 Downing Street's feline-in-residence, has yet again mewed his way into a viral clip.

Midway through a Sky News broadcast, the 'Chief Mouser' to the Cabinet Office padded into the background of the frame, and queued up at the Prime Minister's front door. A dutiful policeman then appears and knocks for assistance — the famous black entrance opens, allowing Larry to get on with whatever urgent business was on his presumably packed ministerial agenda. His official duties include "greeting guests to the house, inspecting security defences, and testing antique furniture for napping quality".

Is there anything more British than this policeman knocking on Number 10 to let the cat in? pic.twitter.com/SpoQkmWI14

Born in 2007, the former stray was adopted from Battersea Dog's Home by Prime Minister David Cameron and entered Downing Street in 2011 — he was said to be a "good ratter" equipped with "a high chase-drive and hunting instinct".

Ever since, he has been a frequent internet and social media star, with a dedicated parody account of his own, and a great many popular videos of his recorded exploits circulating on YouTube — a serial news report interrupter, he frequently gets into fights with other cats that reside in Downing Street's numerous official residences.

Cameron has suggested Larry is a "bit nervous" around males, perhaps due to negative experiences in his pre-governmental past — although former US President Barack Obama is an apparent exception.

Larry the Cat is a meme today pic.twitter.com/tfgR9q0dVD

There were apparently tensions between the then-Prime Minister and Larry during the former's spell in office, due to cat hair on his suit and the smell of cat food, leading Larry to be banned from the Prime Minister's quarters — although after Cameron resigned in June 2016, he spoke of his "sadness" at leaving Larry in Downing Street. When his successor Theresa May took office later that year, it was speculated Larry was stressed as a result of missing the Camerons.