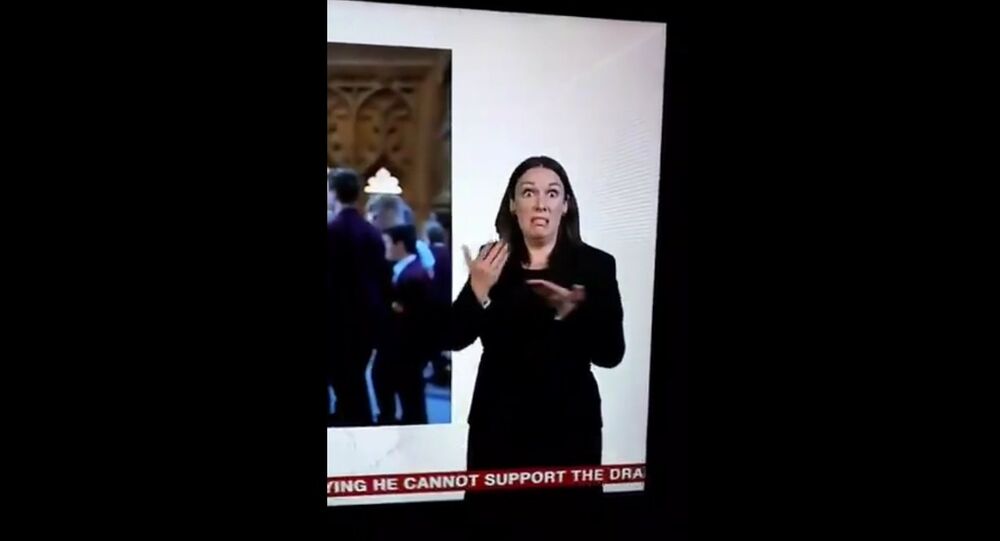 A number of Twitter users noted that the interpreter’s gestures and facial expression essentially show how the British public feels about the Brexit deal that was recently unveiled in its full glory by the May government.

A BBC sign language interpreter has apparently managed to strike a chord with Britons with her performance during the coverage of the recently-unveiled Brexit agreement.

The footage, which quickly went viral on Thursday, features the interpreter conveying what a drama student at LAMDA named Ell Potter described as “the perplexing f*ckery of this situation”.

The sign language interpreter doing the Brexit Agreement on BBC News is perfectly conveying the perplexing fuckery of this situation #Brexit #BrexitChaos pic.twitter.com/bA66SYMXqN

​"I think the way she expresses this clusterf*ck is amazing, and it's the most accurate analysis of Brexit I have seen today," Potter remarked.

Her sentiment was shared by many other Twitter users who noted that the interpreter’s expression essentially shows how the British public feels about Brexit.

if words fail you for #brexit, this sign language terp perfectly describes how everyone feels. @thespybrief

It seems the mess that is brexit is much easier for the BBC to convey in sign language than the spoken word…. https://t.co/kNhEe0Dxxy

Earlier, Theresa May confirmed that Britain would leave the European Union, in line with the schedule.

After more than a year of nerve-wrecking talks on Brexit conditions, London and Brussels have finally produced a draft agreement on the conditions of the British divorce from the bloc.

In June 2016, the United Kingdom voted to leave the European Union in a referendum and is expected to do so by late March 2019, while there are still certain stumbling blocks that impede talks, namely, the Irish border and the post-Brexit UK-EU economic relations, which make a no-deal Brexit scenario a possibility.