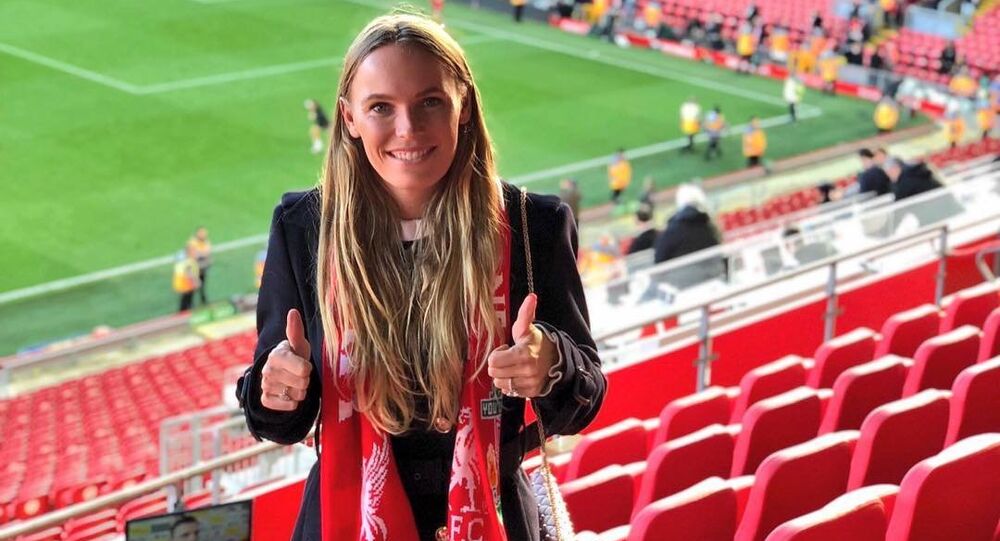 World number three Caroline Wozniacki enjoys huge fan support both from the stands and online, and most recently she has earned standing ovations during the landmark Australian Open. However, many appear sceptical about another aspect of her life that she eagerly engages in.

“Had the best time at Anfield today! Three points and top of the league for now,” she captioned her snapshots with, in which she poses in Reds-themed accessories. In one of them she makes a thumbs-up gesture in the stands, while another selfie features her with her fiancé David Lee, a retired NBA player.

Despite tremendous popularity with tennis lovers and her iconic dazzling smile, Caroline’s love for the Liverpool club appears to not strike a chord with all of her army of Instagram fans. Some rushed to boo her pictures outright:

“I thought you were better than following the Red sh****,” one wrote, with another wondering:

However, there were those who defended Caroline's football club pick.

She “had brains, beauty, athleticism and best taste in football,” one gushed in response to the storm of disapproval.

"You are a Liverpool fan 😍😍that's the best thing about you," another chimed in enthusiastically, adding several smileys.

Had the best time at Anfield today! 3 points and top of the league for now! @liverpoolfc #YNWA 💪🏻

Back in 2011, she already hinted at her love for Liverpool, she flashed a signed Steven Gerrard shirt during her quarter-final victory in the Qatar Open.

The blonde was the first Dane to win a Grand Slam title after defeating Simona Halep in January this year in the Australian Open, with her 34-year-old fiancé actively cheering on her all through the clash from the stands.

“It was a very high-quality tennis match and to have her come out on top, those last couple of points just show her fighting spirit,” the 2015 NBA Championship winner commented at the time, adding that “[I was] more nervous than when I won a championship,” since “there's nothing I can do.”

I can't believe it's been exactly a year since we shot these! 👙😊❤️ #siswimsuit #family #timeflies

Smiling because it’s Sunday and I am still alive at the French Open. Back fighting tomorrow! @rolandgarros.. @cosmopolitanturkiye

I absolutely loved this jumper! Stylish and comfy! #outonthewater @hamptonsmag

Just got to Miami and saw this on the stands! Thank you @oceandrivemag for the beautiful cover!… photographer: @gaborjurina Stylist: @katherinelande Makeup: @taryllatkins hair: @stevenhoeppner