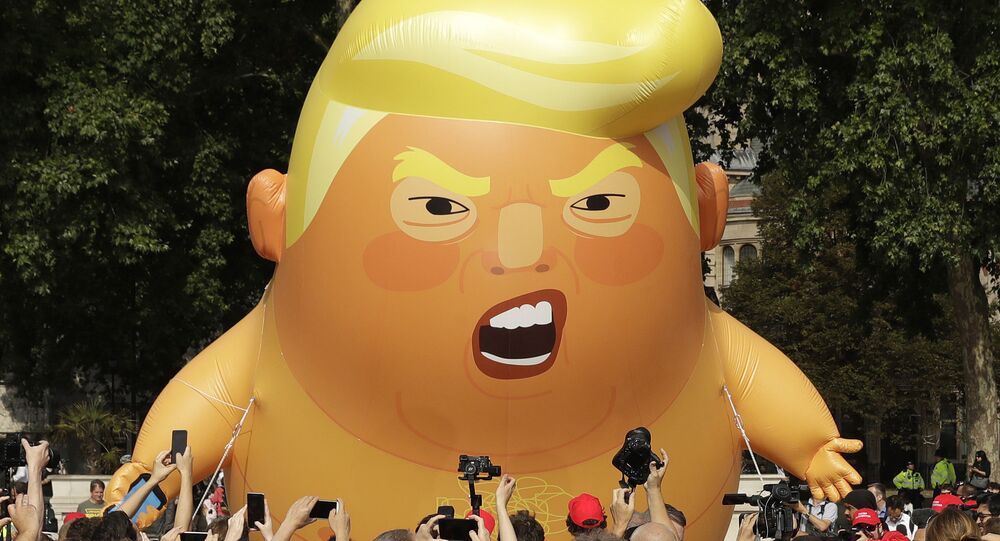 The protest balloon depicting the US commander-in-chief as a big baby is the same one which was used earlier in London, Dublin and New York City.

A huge balloon depicting Donald Trump as a baby wearing a diaper and holding a smartphone has once again been raised in the air by protesting activists — this time, in Paris, where the US President arrived for Remembrance Day.

The balloon was first used when the US President arrived in the UK capital in July. Since then, it has been used in Dublin, Ireland and across the ocean, in New York City.

​The British campaigners loaned it to their French counterparts, who staged their protest at Place de la Republique, according to The Independent.

​The US President, along with 60 other world leaders, attended a ceremony to commemorate the centenary of the end of the World War I.

​However, the protesters believe France should not have invited the leader of the United States, despite America's key role as a French ally in what was then known as The Great War.

"By inviting Trump, Macron is supporting Trump's racist, xenophobic, sexist policies all over the world," Sophie Haas, the organiser of the protest, told reporters.

Protesters during Trump motorcade in Paris. Question: Would Melania get charged with assaulting the president if she decked her hubby while in the car? pic.twitter.com/K6CI2hRLac

​The original inventors of the Baby Trump balloon had intended the prop to become an international phenomenon, setting up a crowdfunding fundraiser, which has since collected $20,000.

"When we passed our original crowdfunding target, we said we'd use the excess money to take the Trump baby wherever we could to globally troll Donald," said Kevin Smith, the UK protest organiser.

It is unclear whether the US President was actually trolled by the balloon.

Protesters Hold Rally Against Trump During His Visit to Paris