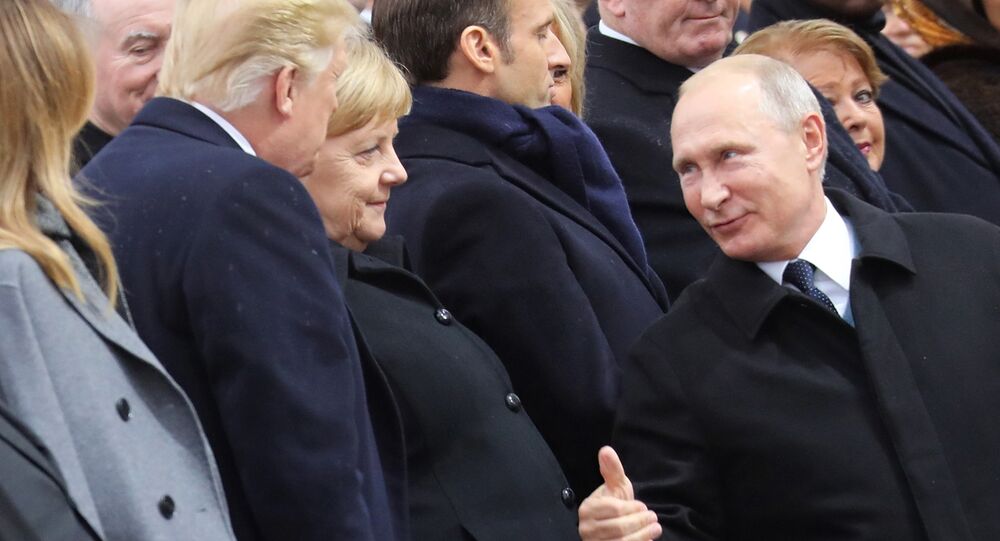 As Russian President Vladimir Putin arrived at the Arc de Triomphe in Paris for a solemn ceremony marking 100 years since the end of World War I, he first gave a friendly handshake to a number of world leaders already present for the event, including French President Emmanuel Macron, German Chancellor Angela Merkel and US President Donald Trump.

A handshake with POTUS Donald Trump has attracted special attention since cameras also captured a thumbs-up gesture Vladimir Putin made afterwards, before moving on to greet US First Lady Melania and returning to his place.

Conspiracy theories and eternal contemplations on them were most naturally brought up:

“CNN will definitely report that encrypted messages were exchanged,” one user wrote in Russian.

“No accusations will hopefully come along: shook hands, gave a smile – that would automatically mean enrolment….and new sanctions will pour in, yet another round,” another stated tongue-in-cheek.

A different netizen suggested a name for the video that he deemed to be appropriate: “a clip on how to wear a poker face in whatever complicated situation.”

“What news! When should we expect new sanctions?” another wrote, echoing the same rhetoric.

“An event of a grand international scale,” one satirically remarked.

“Master has appointed me to be his favourite wife,” chimed in another, quoting a line from a well-known Soviet-era film “White Sun of the Desert.”

“Putin ran to thank Trump – for sanctions,” another user suggested, while others took note of Trump failing to shake hands with Ukrainian President Petro Poroshenko, who was standing in a higher row.

“Trump? Putin didn’t do that either!” another commented.

"Excatly that same meeting 'on the sidelines'," a different Twitterian butted in.

Several users instantly took note of Putin, not just giving Trump a hearty handshake, but also a thumbs-up and a pat on the shoulder, before reaching out to greet Melania.

"We're anticipating breathtaking analysis from our American colleagues," one noted.

As many as 70 world leaders arrived on Sunday at Paris’ Arc de Triomphe for an official ceremony to commemorate the centennial anniversary of the armistice that ceased the fighting during World War I, before the bloodshed was officially brought to an end by The Treaty of Versailles the following year, on 11 November 1919.