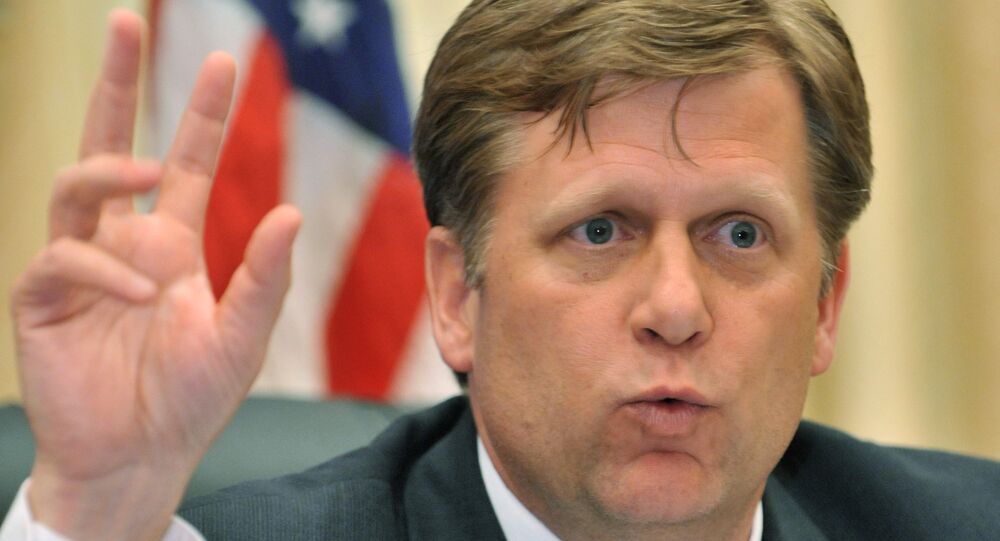 The former ambassador, banned from entry to his country of service, switched to Russian to celebrate the Democratic takeover of the House, implying it was a great victory over Vladimir Putin.

While some may view the Democrats' takeover of the US House of Representatives as a win over Republicans generally or US President Donald Trump personally, former US Ambassador to Russia Michael McFaul seemed to see it as related to his biggest fixation: Russian President Vladimir Putin. Apparently, the former ambassador was so overwhelmed with emotion that he even began tweeting in Russian.

"Victory! Regards to VVP," he wrote after the midterms, referring to the Russian president by his initials, a form commonly used by Russian opposition groups.

​Another post, responding to MSNBC Director Jesse Rodriguez's prediction of the Democrats' imminent takeover over of the House, simply said "Yes!" in Russian.

© REUTERS / Kevin Lamarque
2018 US Midterms: Why Trump Says They Were a 'Tremendous Success'
An ambassador to Moscow during former US President Barack Obama's administration, McFaul is persona non-grata in Russia, having been issued an entry ban. According to Russian Foreign Ministry spokeswoman Maria Zakharova, McFaul "purposefully spoiled international relations" between Russia and the US. However, McFaul managed to capitalize on what would have been a disastrous failure for any other diplomat by writing a book in which he tells his own version of how he "ended up Putin's personal foe."

Given his personal history, it's little wonder that McFaul had his five minutes of fame after the election of Trump in 2016, when talk about alleged Russian meddling in the election was at its peak. However, during the midterm campaign in 2018, the Russian issue was for most part nonexistent — arguably, a signal of Democrats' realization that US citizens had grown tired of hearing the same talk over and over again with no real evidence. But some people, like the former ambassador, apparently, just don't know when to stop.

Therefore, it was little surprise that English-speaking Twitter users took the diplomat's tweets with an almost palpable frustration.

"Already drunk?" one commenter asked. "Say what now?" responded another.

​Others, however, came up with their own conspiracy theories, claiming that the omnipresent Putin actually intended for the Congress to end up split, as it would create even more chaos and division within the US.

"Divided house (country) is VVP goal. He has won," another comment read.

Divided house (coutry) is VVP goal. He has won.

Seriously? Lol. I guess he would be rooting for dems to have even more chaos in US internal politics, no?