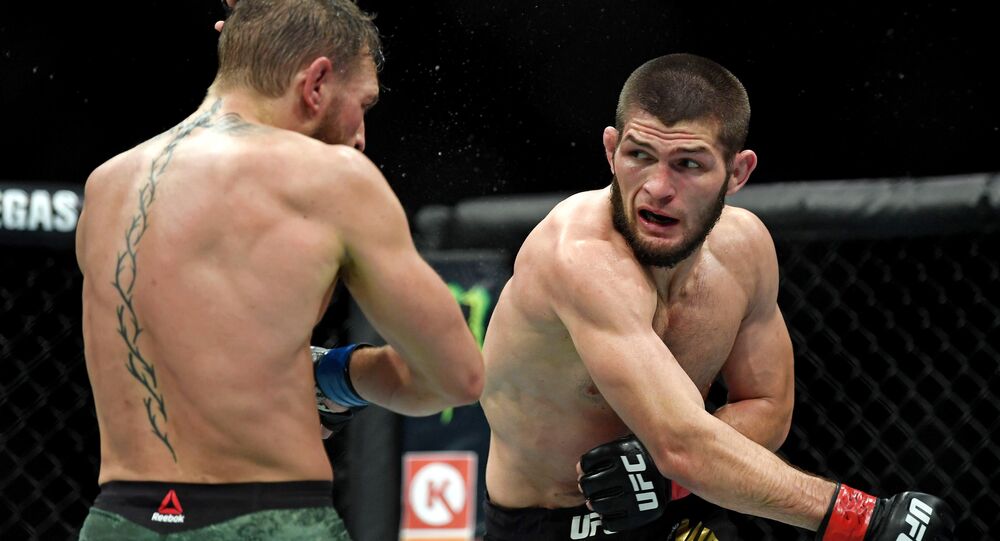 Notwithstanding his suspension for the chaos which ensued following his October 6 brawl with legendary Irish fighter Conor McGregor, undefeated MMA champ Khabib Nurmagomedov has been sending and receiving a slew of offers for his next highly anticipated bout.

Twitter users have been losing their minds speculating about whom the 27-0 Russian MMA fighter will fight next since manager Ali Abdelaziz blew off American MMA fighter Tony Ferguson's challenge and promised fans that @TeamKhabib would blow fans' minds with "big news coming."

You’re a good guy and you deserve a big fight. You should fight conor or Nate or Gaethje or gsp I’m a big fan and love watching you fight but you’re one of the easiest fights in the top 5 stylistically for the eagle https://t.co/Zqe2acgU7z

Addressing Ferguson, whom UFC chief Dana White demanded Khabib fight before a rematch with McGregor would be possible, Abdelaziz tweeted that Tony was a "good guy" who deserves "a big fight," but urged him to take on Conor, Nate Diaz or Justin Gaethje instead, saying he'd be "one of the easiest fights" for Nurmagomedov.

We will blow your mind big news coming @TeamKhabib 🔥🔥🔥🙏🏻

The tweet brought out the rage of fanboys on both sides, with Khabib detractors suggesting Tony would "pour the pressure on" Khabib if he tried to pull a repeat of his October 6 performance against McGregor.

We all see Khabib getting just a little bit tired in there after a couple rounds…he had to take the 3rd round off to recover vs Conor…Tony would pour the pressure on if Khabib came out slow like that. Khabib did very very little in that 3rd round..

He's the only one that could beat khabib. There is no way around that

If Tony is one of the easiest fights, then book it and let Khabib prove it!!! Tony deserves this shot more than anyone!

Users were even more pumped by Abdelaziz's next tweet, which promised "big news" without providing any more details. Fans immediately began speculating that the news may be about a rematch with McGregor (even though both Khabib and Conor are suspended from the UFC until at least December), or the much-discussed fight with legendary undefeated boxing champion Floyd Mayweather. Other fans were still hopeful that it might be Tony Ferguson.

We will blow your mind big news coming @TeamKhabib 🔥🔥🔥🙏🏻

Others suspected that it may be a bought between Khabib and MMA fighter Ben Askren, who announced plans to switch to the UFC last week and challenged the Russian fighter.

Gonna be Khabib vs Askren for the 165lbs title 100 percent

I wish it was vs Tony, but i see Ben Askren liked the tweet. So im guessing its going to be Khabib vs Askren catch weight at 165 pounds

Everyone is saying Floyd lol my money's on a 165lb catchweight bout vs @Benaskren calling it now.

One user even created a handy poll, with voting by 3,100 users showing Askren coming out on top again.

Finally, a few fans were still holding out for a Khabib vs. Floyd fight, despite earlier speculation that a Khabib-Floyd matchup would be impossible, given the fact that boxing and mixed martial arts are governed by different rules.

Undefeated UFC lightweight champ Khabib Nurmagomedov defended his title against Conor McGregor on October 6 in Las Vegas. After trouncing his opponent in the fourth round, all hell broke loose at the Vegas arena hosting the bout. Both fighters and their teams face possible fines and further suspensions. Nurmagomedov himself was suspended after jumping out of the octagon and attacking McGregor's coach Dillon Danis, whom he accused of insulting him, his family, religion and country throughout the match.