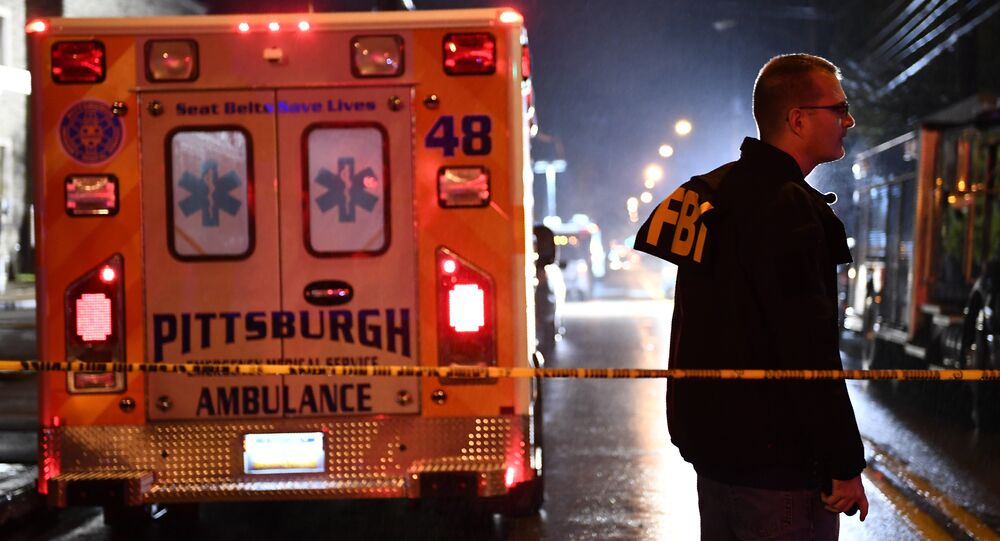 Robert Bowers, the suspect in the Pittsburgh synagogue shooting, had an account on the social media platform Gab, where he posted anti-Semitic comments.

In a relentless series of tweets, Gab, used by the Pittsburgh synagogue shooter, suggested that tech giants had conspired against the platform and called on President Donald Trump to take action.

Today https://t.co/J3Rfto6fi3 spent all day working with law enforcement to ensure that justice is served.

For this, we have been no-platformed from:@stripe@paypal@joyent

In a matter of hours. This is direct collusion between big tech giants. @realDonaldTrump ACT!

The network, which projects itself as a champion of free speech and individual liberty, has been banned from PayPal, which claimed that the social media network had violated its user agreement.

BREAKING: https://t.co/J3Rfto6fi3 is now banned from Paypal "just because." pic.twitter.com/VA1NhY5zhr

It has also received notices from its new hosting provider, Joyent, and Stripe, a software platform for running an internet business that mirrored PayPal's decision.

Breaking: @joyent, Gab’s new hosting provider, has just pulled our hosting service. They have given us until 9am on Monday to find a solution. Gab will likely be down for weeks because of this. Working on solutions. We will never give up on defending free speech for all people. pic.twitter.com/YvnBOFoQQn

Besides Gab, the suspected perpetrater, Robert Bowers, had accounts on Twitter and Facebook, but it was Gab that was vilified by the media even though the platform made it clear it had provided Bowers' user data to the FBI after it was alerted to his profile.

Both @joyent and @paypal should be ashamed of themselves. https://t.co/J3Rfto6fi3 has worked tirelessly with the great people at the FBI and DOJ to see to it that justice is served for today’s horrid events. We have vehemently disavowed any and all violence.

In a lenghty statement on Bowers, Gab stressed that it had “zero tolerance” for terrorism and violence, emphasizing that “live streamed murders on Facebook” and threats on Twitter, remained unaddressed.

Social media users leapt to Gab's defense, insisting that the platform shouldn't be punished for the actions of a single user:

— The media has been writing hate articles about Gab.
— They were banned from PayPal.
— And now they are banned from hosting service Joyent, shutting them offline.

Can someone explain why? Why is a company being punished for the actions of one user (who was banned)?

So @getongab got their web hosting revoked and banned from Paypal. This is in response to the recent, awful, terrible shootings today. The alleged shooter posted quite often to Gab as a user of the service, but also used several other sites like we all do: email, messaging, etc.

But why single out Gab? Why not the other web services the person used? A lot of evil people use the Internet, we all do. They post their maniacal thoughts everywhere, not just on one part of the web.

Many highlighted the fact that no action has been taken against other platforms, where Bowers also had accounts, and pointed to the double standard applied by the companies that ditched Gab:

BREAKING: @joyent which is the hosting provider of @getongab has just banned Gab from using their hosting service.

@getongab is getting destroyed for standing up for liberty. It's not right. Pull every social media platform every time any murderer has any account if that's the new standard. @realDonaldTrump don't let the government run roughshod over the #1stAmendment

A youtube user was directly inspired by youtube to shoot up youtube…yet they still exist. Paypal and stripe even host content there. The double standard being applied to @getongab is ridiculous.

People calling for @getongab to be wiped from the Internet because one wacko committed a mass murder act of evil. There have been many who have committed these types of attacks. They had accounts on Twitter, Facebook, Instagram, etc… First time a site was held responsible.

Some, however, didn't mince words while condemning Gab for what they claimed was harboring anti-semites and nationalists:

Robert Bowers, the suspect in the Pittsburgh synagogue massacre, was active on Gab, a right-wing Twitter alternative that is a refuge for anti-semites and white nationalists

So the synagogue shooter was a member of the Gab social media site, which is a far-right alternative to twitter, popular with the Alt Right and other extremists (e.g., Nazis) kicked off of twitter.

Gab has based its business model on being willing to host some of the internet's most hateful content. Now it's relishing the attention it's receiving in the aftermath of the Pittsburgh synagogue shooting. https://t.co/FF7iClIsez

Robert Bowers, who reportedly shouted "all these Jews need to die," opened fire in the Tree of Life Synagogue in Pittsburgh on Saturday, killing eleven people and injuring six others.

After his arrest, US Federal prosecutors charged him with 29 criminal counts including violence and firearms offenses, as well as violating US civil rights laws.