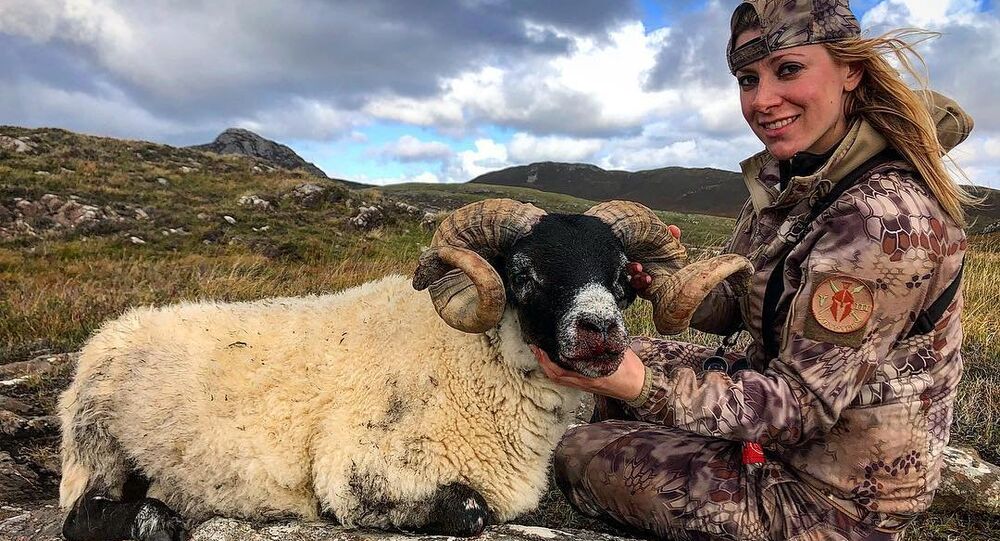 US TV host Larysa Switlyk has triggered a large-scale debate on social media, following her photoreport on hunting in the Scottish highlands. Many were on the rampage over her “cruel” images with slaughtered animals in a bid to draw attention, while others chimed in saying there is nothing wrong with her eating the meat she herself procured.

A female hunter from the US, who posed with a goat she had shot during her “hunting adventure” on the Scottish island of Islay, has left Britain after a number of death threats she received on social networks.

"Hopefully that will give enough time for all the ignorant people out there sending me death threats to get educated on hunting and conservation," American anchorwoman Larysa Switlyk tweeted.

Beautiful wild goat here on the Island of Islay in Scotland. Such a fun hunt!! They live on the edge of the cliffs of the island and know how to hide well. We hunted hard for a big one for 2 days and finally got on this group. Made a perfect 200 yard shot and dropped him with the @gunwerks and @nightforce_optics! (Good thing too because he could have ran off the cliff into the water). Ever interested in hunting Scotland and doing some whisky tours, email larysa@detailcompany.com!

Proud of Jason and his 2nd monstrous Red Stag here in Scotland…. talk about Gold Medal Status. Was fun to be behind the Camera and capturing it all on film! Amazing hunting here in the highlands ~ for more information email me Larysa@detailcompany.com!

She earlier posted what were seen as gruesome images of herself “connecting back with nature” and posing together with her prey while on a hunting trip to Scotland, accompanying one of them with a caption: "Beautiful wild goat here… Such a fun hunt!” "Made a perfect 200 yard shot and dropped him," she went on, provoking a storm of criticism in the comments. Even more negativism was prompted by posts where Larysa pondered about a “gold medal” for her hunting companion Jason in light of his “2nd monstrous Red Stag here in Scotland.”

Among those who expressed his utmost fury is comedian Ricky Gervais who didn't by far mince his words on the matter: "A couple of c***s, dressed up like c***s, shooting a beautiful animal, then posing with the murdered carcass like right c***s and posting it on social media to show the world what c***s they are,” he wrote on Facebook, having shared Larysa’s picture.

© Sputnik / Vladimir Astapkovich
Hunter or Hunted? Man Fights For His Life After Bear He Shot Falls on Top of Him

Andy Murray's mum Judy also responded, albeit in less strong words, although choosing to tag the Scottish government in her post:

"'A unique hunt?' Disgraceful. It's a goat. And it's in Scotland. On a beautiful island. Stop this pls @scotgov".

The latter shortly weighed in, with Scotland's First Minister Nicola Sturgeon tweeting: "Totally understandable why the images from Islay of dead animals being held up as trophies is so upsetting and offensive to people." A governmental spokesman later stated that it is clear for them that there are abundant concerns over the issue, adding “the environment secretary will consider whether clarification or changes to the law might be required."

If you guessed my muskox was bigger on my last post you were wrong… Jason’s actually measured a little bit bigger but not by much! Well at least I made a killer long range shot on this Arctic Hare with the @gunwerks & @nightforce_optics ~ #gunwerked

Dream stag right there Jason got with a narly drop time off his right side that looks like a baseball bat!! I shot it with a camera so it kind of counts?? Hunting Scotland is unreal!!! @gunwerks @nightforce_optics @larysaunleashed

Comments on Twitter under respective hashtags naturally arrived in abundance. Some treated the whole story as a lengthy parody, expecting the woman to shoot “koala bears, puppies and lemurs” next.

Ok. Now starting to think this whole thing is a parody. Waiting for pictures of the koala bear, puppy and lemur hunt.

Her Instagram feed feels like it’s a parody at the end of a National Lampoon film. Here, there’s a tender sapphic moment over a dead ram. pic.twitter.com/STmIU8dkEV

“What fresh hell is this?” another asked.

Some opted for slightly humorous remarks, although those seem to have failed, with most stating in black and white that “it ain’t hilarious”:

​Now we know why the hedgehog population has declined.

No hamster is safe

Of all the things it is, it ain't hilarious.

One even suggested that game hunters would be better off targeting each other instead of wild animals:

Game Hunters should only be allowed to hunt other hame hunters. That would be more of a challenge for all of them.

There were those however, who attempted to shift away from judgements and take the heat off, remembering how peacocks “scared the bejesus out of” them when on vacation.

I remember when me & my family visited Scone Palace, when I was a lass. The peacocks scared the bejesus out of me, to say the least. I wonder if @LSwitlyk will ever manage to 'bag' the Lesser Spotted Haggis?

One even mentioned the apparent hypocrisy in users’ comments, pointing out that many online accusers are more than likely huge meat fans themselves.

Another even branded the commenting “c***s” as “pompous:”

Fair point. I was just surprised by how much outrage there was at the idea that she had eaten it afterwards.

Forgive my confusion here, but how many of the people who are outraged by this post regularly eat cows, chickens, lambs or pigs which are also deliberately killed simply in order to be eaten? Explain the difference to me please?

There were however those who clearly drew a line between “responsible farming” and “psycho killers,” saying “she’s killing for a laugh and to show off.”