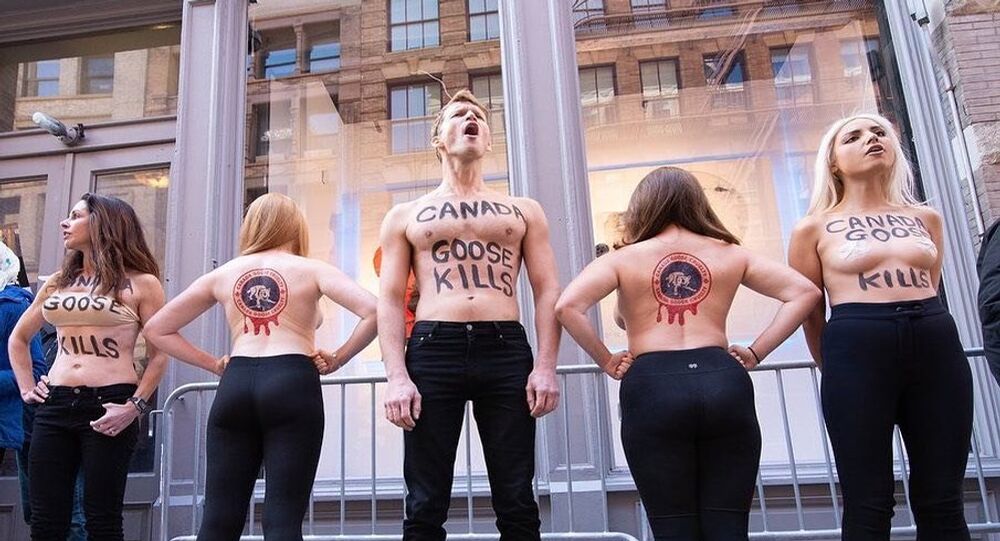 The PETA demonstration was held on Thursday outside the flagship store of the outerwear brand Canada Goose in New York City.

Chanting, “Canada Goose has blood on their hands. Where the hell is your compassion,” PETA and other animal rights activists have started a rally against the winter apparel brand with an eye to exposing the company’s alleged coyote killing practices.

Five of them embraced the chilly New York temperatures and stood topless in front of the store wearing only black pants and black boots, with “Canada Goose Kills” written on their chests, while others were holding signs, “Fur Kills,” as well as graphic images of dead geese.

They have accused the Canada-based company, which specializes in winter clothing, of using inhumanely-killed coyotes, geese and ducks to make its jackets and other products.

Gloves (and coats) are off! Topless PETA supporters take to the 40F streets of New York City to protest Canada Goose's use of coyote fur
Topless protesters rallied Thursday against the outerwear brand Canada Goose
The demonstration took place outside the company's flagship store pic.twitter.com/W1KilslHk4

“Every Canada Goose coat represents the suffering of coyotes who were caught in painful steel traps and geese whose throats were slit. PETA is calling on shoppers to refuse to give a dime to this cruel company until it stops selling items for which sensitive animals are tormented and killed,” PETA Executive Vice President Tracy Reiman said in a statement.

Coyotes captured in @CanadaGooseInc steel leg hold traps attempt to chew off their limbs to escape and get back to their cubs. #AnimalRights activists with @peta say these canines should not be tortured and skinned so that Canada Goose can decorate coats with their fur. @NYMag pic.twitter.com/obUPDrO31x

Meanwhile, Canada Goose has provided a statement to NBC 4 New York, saying that it was “not surprising, but…unfortunate to see the lengths PETA will go to in spreading their false narrative about our company’s animal welfare practices.”

“Their allegations are without merit and we remain committed to the responsible use and ethical sourcing of all materials in our products. PETA has a long history of using sensational tactics to try to gain media attention and this is just another example.”