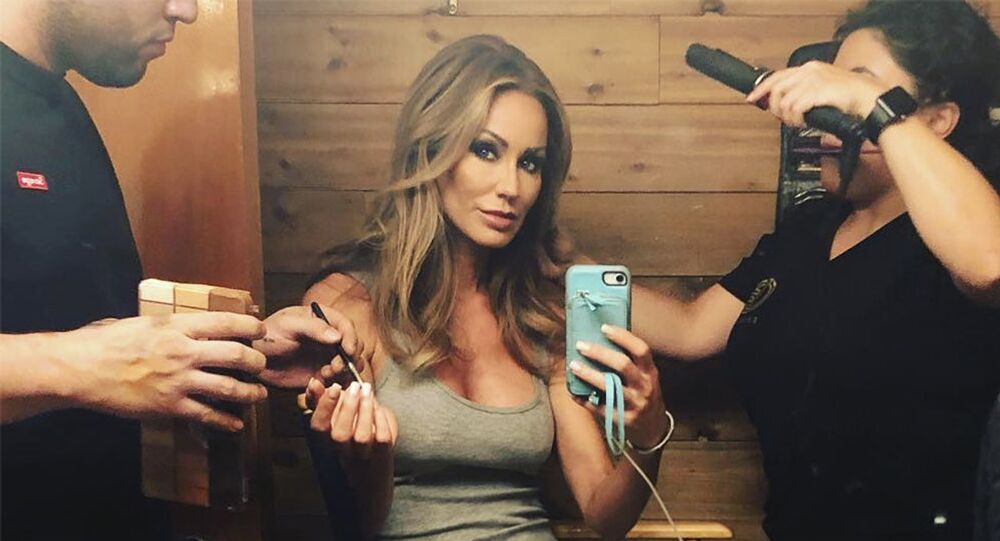 Over the weekend, rapper T.I. drew the US first lady’s ire after he tweeted a video, featuring a woman, who strikingly resembled Melania Trump, baring it all in the White House.

Model Melanie Marden has revealed that she has been receiving death threats since playing FLOTUS in T.I.’s freshly released video, in which she is wearing Melania Trump’s now-infamous “I really don’t care, do U?” jacket before starting to strip for the rapper in the Oval Office.

❤️ yourself. Right now, as you are! — - With all your flaws, things you want to change about yourself, all your failures. Forgive yourself and just love yourself like your Mom loves you. Be gentle with you, don't expect perfection. The more you accept yourself right now as you are. The more life will respond to that. The better your life will become. Speak kindly to yourself in your head. Have encouraging things to say to yourself. Like you would to a small child. That will eliminate negative vibrations to your entire body. Making you healthier, happier and overall feeling great. God bless you, now. You are good enough now. You are enough now. You are someone's perfect now. All love 💞🙏 #begentle #youdeserve #yourlove #vibratehigher #bewell #attractwhatyouwant #bekind #love #you #selftalk #acceptance #grateful #heart #mom #unconditional #healing #energy #instalove #instagood 🦄❤️ ps #tgif — - — 📸 by the #hot @jenaealt

The Melania lookalike went on to say that, in her mind, there was no reason for the first lady to be outraged:

“The first lady’s husband does a lot of bullying himself. So they’ve got some thick skin. If I was insulting her and degrading her, then it would be one thing, but I don’t think I was.”

The Canadian model explained that she had no intention of making a political statement by taking part in the Atlanta-born musician’s clip:

“It was an opportunity for me to step right outside my comfort zone and play the first lady – yes, naked, which I’ve never done before,” she revealed.

Marden ultimately gave a sneak peek into her upcoming project – this time with her clothes on and mimicking Melania’s accent.

The Melania Trump look-alike in the provocative T.I. video doesn't think she was "degrading" the first lady. https://t.co/bcdxUcQ37U pic.twitter.com/ekaIgimpdu

Social media users went bananas over her interview, with many saying that the first lady’s reaction was “faux outrage,” as they’d already seen Melania naked after her old modeling pictures surfaced during the 2016 election campaign:

Wow, I don't understand…the first lady has nude pics out there already lol

We literally know what Melania looks like naked. I think her outrage at being portrayed as a stripper is laughable.

Anyone with a smartphone can see naked pics of @FLOTUS whenever they want. Let's stop with faux outrage.

Others suggested that the clip was a “tasteless farce” and blasted the Canadian model:

Really? Her first name is MELANIE???

What are the odds?…

And it's not like she came up with the idea for this stunt!

Anybody hear of any actual threats against the man who originally came up with the idea for this tasteless farce?

@melaniemarden doesn't look like @FLOTUS. @FLOTUS is 10 times prettier. Marden is a scab

How can you claim to support women when you degrade our 1st lady in such a disrespectful manner. Strip as your self — FINE with me. Pretend you are someone else is nothing but a HATEFUL thing to do!

What a pathetic, trashy video.

Some were stunned to learn about the death threats the woman in the video has been receiving:

Can we just stop making death threats for the love of everything holy.

I don’t think you should be getting death threats. But, empowering women? What universe do you live in? All you did was denigrate women.

People need to get a life. With all of the issues we all have living day to day, people are threatening a woman for being in a video? Because it was a spoof on the first lady?

I would never think to wish harm on you. I don’t support anyone advocating such a thing on you or anyone. But, the video of you portraying the First Lady stripping in the Oval Office was offensive and disgusting.

Once T.I.’s video was unearthed, Stephanie Grisham, spokeswoman for the first lady, dismissed it as unacceptable and “disgusting” and called for a boycott of the rapper.

The developments came shortly after Melania Trump, who’s been promoting her anti-cyberbullying initiative, “Be Best,” revealed in an interview with ABC that she believed she was the “most bullied person in the world.”