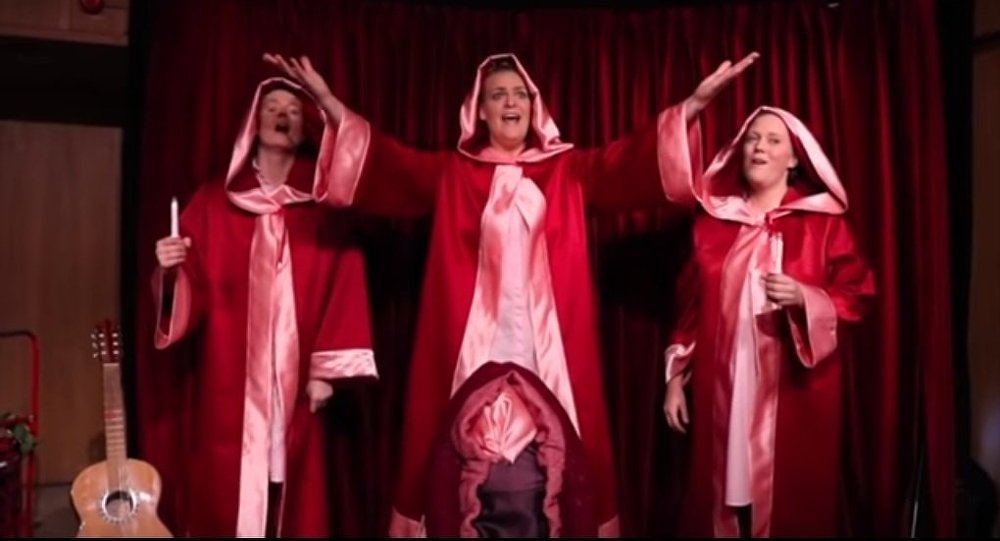 A feminist theater play with a telltale name "Salon Vagina!" expected to enlighten schoolkids about "the pussy" has caused many angry reactions among ordinary Swedes.

The performance shows three feminist actresses singing about female genitalia while spreading their legs. An excerpt from the play posted on YouTube shows them chanting "pussy, fanny, muff, beaver, slit" while standing on their heads with legs spread wide open. "I want to call mine a canary bird. It's nothing unusual," one of the actresses says in the show.

"Our play is a peppy humor show about female genitals. It feels great to do theater for children in the upper secondary school, something we felt was needed," actress Malin Karlsson told Swedish Radio.

On its website, "Salon Vagina!" is described as a "playful and humorous take on stigmatized female sexuality," which also "explores the cultural history of the vagina, its symbolic, scientific, religious and everyday role."

"With singing, dancing, motion and humor, we explore norms and taboos. We investigate and cross the boundaries of how a woman should be," the feminists write on their website.

​The performance, which is set up in collaboration with the Swedish Association for Sexuality Education (RSFU), is about 60 minutes long and is followed by another 30 minutes' "aftertalk." The regular price is SEK 150 per student ($16).

The trailer posted on YouTube has gathered a plethora of negative reactions from Swedes, with comments ranging from "decadence and nihilism" to "child abuse" and "utter madness." Some ventured that if a similar play was made by, for and about men, it would have instantly triggered accusations of patriarchy and male chauvinism.

"[Swedish Radio journalists] finally get to write about "pussy" while at work, and you're paying for this," columnist Jan Sjunnesson tweeted wryly.

The topic of female sexuality has of late received a lot of attention in the Swedish media. Recently, the Menstruation Association (Mensen) received a SEK 500,000 ($56,000) contribution from the newly established Gender Equality Authority for a project aimed at "breaking the taboo around women's periods" and create a "period-friendly" work environment, which has raised many eyebrows in Sweden.