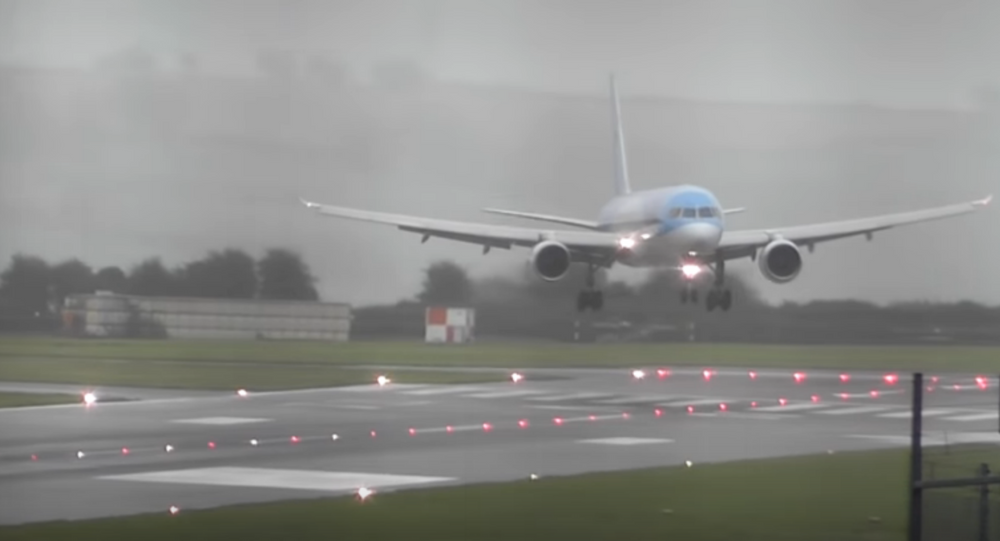 The Boeing 757-200, which was flying from Menorca, Spain, landed sideways after getting caught in Storm Callum's crosswinds, which topped 45 miles per hour.

​The storm brought rainfall and winds of up to 69 miles per hour to England this past weekend and is the third major storm to hit the UK since September, according to reports.

According to an unidentified spokesperson for the charter airline, the company was proud of "her [the pilot's] impressive landing in adverse weather conditions."

​"It showcased how highly skilled and well trained our pilots are," the spokesperson added, the Huffington Post reported Monday. TUI Airways did not immediately respond to Sputnik's request for comment.

The video, which captivated Twitter users, shows the airplane approaching the runway at a sideways angle before softly landing on the tarmac.

​"Aircraft need to compensate for the crosswind otherwise they will be blown off course, they do this by pointing their nose into the direction the wind is coming from, demonstrated perfectly by this crew," YouTuber "Mraviationguy," who posted the video of the landing on Sunday, explained.

​"It is always fascinating to watch planes landing in strong crosswinds, and it is fantastic to see such amazing skill by the pilots," "Mraviationguy" added.

Many Twitter users agreed, touting the landing as "incredible" and "brilliant."

A similar video was uploaded in 2012 featuring multiple planes making sideways landings at Düsseldorf International Airport in Germany. After the video went viral, Daniel Fahl, a pilot for a major US airline, explained to CNN that sideways landings are "not really dangerous."

​"It just requires the utmost of your training to kick in. It does look dramatic, but that's just because the airplanes are so susceptible to the wind. But that's how they're designed. They're designed to be weather vanes that point into the wind," Fahl added at the time.