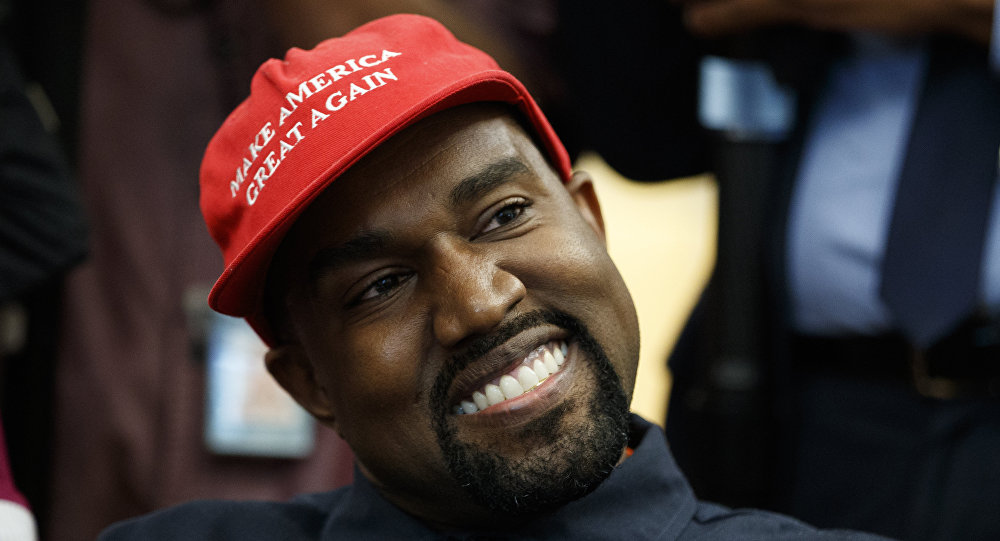 Since telling the world that he suffered from bipolar disorder, the iconic rap artist has been making international headlines for his eccentric conduct, controversial statements on slavery and pro-Trump rants, claiming that he’s been bullied for his support for 45.

Hours after visiting his “brother” Donald Trump in the Oval Office on Thursday and launching into a 10-minute soliloquy about his wholehearted support for the president, Kanye West was spotted at an Apple Store, where he jumped on top of a wooden table to deliver an impromptu “keynote” speech.

So Kanye just shows up to the Apple Store in Georgetown and stands on a table… pic.twitter.com/DVyPytm5vG

Kanye in the apple store being Kanye pic.twitter.com/Joy2chVqRL

A reporter for Religion News Service, Jack Jenkins, happened to be in attendance to catch the moment on camera and share it on Twitter.

He just asked to give a “keynote” on top a table.

He said that West told the crowd that he had made a custom hat for Trump with an updated version of his “Make America Great Again” slogan. Jenkins said that Kanye cut out the “again” part because it “hurts black people.”

He’s announcing he made a hat for Trump that says “made an updated hat that says ‘make America great’ without the ‘again’…and Trump wore it!”

Shows a picture on his iphone of Trump wearing said hat.

Says the “again” part of the original slogan “hurts back people.” pic.twitter.com/mt2vO3Sl86

A CNN reporter, Caroline Kelly, who was also one of those lucky customers who walked into the store only to see Kanye’s ramblings, tweeted a video of the rapper wondering whether America was “ever great for us.”

“…It hurts us as people, specifically black people, the idea, because we say, was America ever great for us? So we made a updated hat that said, lmake America great, and Trump wore the hat so he is open to adjusting and listening” pic.twitter.com/nKgkDUKtga

Yeezy then proceeded to show everyone a picture of the president sporting the “MAG” custom-made design.

His Apple store trip concluded, with him leaving and telling the crowd that he was going to Africa, presumably to record an album, as he told TMZ in early October that he would travel to Africa in the next couple weeks to complete his 9th studio album, “Yandhi.”

Though it remains unclear what West was doing at the Apple Store, netizens were quick to come forward with their versions, mainly making references to Yeezy’s meeting with Trump, where he pitched the president on an “iPlane One” prototype, which, Kanye claimed, would be designed by Apple to replace Air Force One.

Pitching that “Iplane” idea of his 😪 I miss the old Kanye

Was he buying an iPlane?

Many kept throwing jibes at Kanye, who accidentally revealed his iPhone password, which was set to a plain 000000, when he tried to show something on the phone to Trump:

Apple: Be sure to use a unique numerical password to keep your phone safe!

Users suggested that he was at the store to change the password after it was exposed:

Probably needed somebody to reset his password now that the entire world knows it's just 0s.

His choice of outfit has also become the subject of widespread trolling and prompted a barrage of questions: Kanye – for God knows what reason – was sporting a US postal service vest, and users suggested that he went postal. Literally:

Because he's delivering a message.

In other news, sales of United States Postal Service outerwear has increased at numerous locations throughout the northwest.

PLEASE ASK HIM WHY MY PACKAGE HAS BEEN “OUT FOR DELIVERY” SINCE LAST TUESDAY.

Isn't posing as a mailman a felony?

One of the customers in the crowd garnered special attention on social media, having apparently stolen the spotlight from Kanye due to his bizarre camera device:

Excuse me, I know Kanye is at the Apple Store but what is this pic.twitter.com/ryxUskiG2U

Many others, however, seemed to be really concerned about Kanye’s mental health – even though he had told Trump that he was “misdiagnosed” with bipolar disorder months after opening up on having suffered from the condition:

So is this OK with the #applestore, that people can just climb up on their tables and rant about crazy stuff? I'll give it a try tomorrow. I have things I'd like to say.
Someone plz get Kanye help. He is clearly in a manic episode. @KimKardashian

He did the same thing last week at a Detroit art school. He's showing signs of being manic. Manic periods can last for days, even weeks. https://t.co/QNLJRSKswu

This is like when we all watched Britney & Amanda Bynes struggle in public b/c of untreated mental health issues. He admitted that he stopped taking his medication & that he hasn’t slept in days. It’s not funny. There’s nothing to gawk at. His family needs to get him help ASAP.

Sporting a MAGA hat earlier in the day, Kanye met with Trump at the White House to discuss a wide array of issues, including crime levels, manufacturing in the United States, prison reform and other problems.

Delivering an enthusiastic monologue, West referred to himself as a “motherf**ker” when praising Trump:

“Let’s stop worrying about the future. All we really have is today. Trump is on his hero’s journey right now, and he might not have expected to have a crazy mother**ker like Kanye West.”

The president said he was “pretty impressed” by Kanye’s speech, and at one point the musician came up to Trump saying “I love this guy right here. Let me give this guy a hug.”

Here is a video of @realDonaldTrump giving Kanye West a hug. pic.twitter.com/hgnPMqBG3S