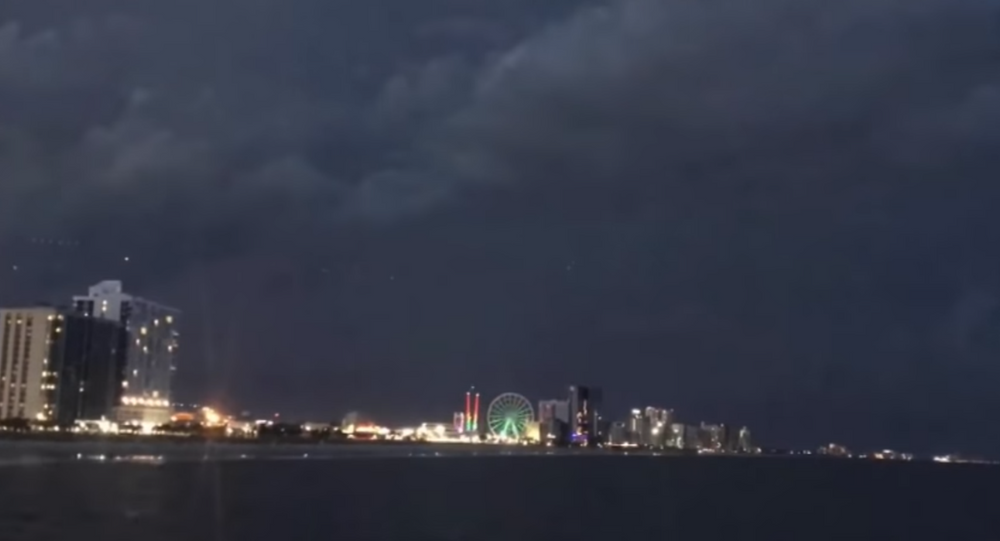 Mysterious lights caught on a time-lapse video recorded from a pier in Myrtle Beach, South Carolina, in early August have triggered conspiracy theorists who claim the footage is evidence of a UFO sighting.

The recording, which shows lights hovering in the night sky above a Myrtle Beach pier, was captured on August 5 and later uploaded onto website Mutual UFO Network (MUFON) on October 4.

The footage was also shared on YouTube on Sunday by user UFO Zone, who stated in the video's description that it shows a "massive ‘spaceship'" lingering above the area during a thunderstorm.

​"I was taking the pictures off the edge of a long pier after dark, so there were no reflective surfaces around," the unidentified filmer who shared the recording with the site wrote. "I did not notice the objects until I returned home and checked the photograph and video."

The individual noted that they had been intending to simply capture "pictures and time-lapse [video] of the incoming storm."

Sunspot Solar Observatory / Facebook
'It Wasn't Aliens': UFO Ruled Out as Cause of US Observatory Lockdown

Commenters on both MUFON and UFO Zone's page were quick to shut down the claims being made, with some suggesting the lights were "all internal camera lens reflections."

"It's just lens flare from the bright pinpoint lights below in one of the lens elements," Buzz K wrote on YouTube. "Nothing to see here. Move along back to your Bud Light. Dilly dilly.﻿"

Another unconvinced user wrote, "I think I saw bigfoot on the ferris wheel."

The latest reporting on puzzling and eyebrow-raising content comes days after a "mysterious object" washed ashore on South Carolina's Seabrook Island. Photos of the suspicious object were uploaded and shared on Facebook by the state's Lowcountry Marine Mammal Network, a nonprofit tasked with increasing awareness and education regarding marine mammals of the Palmetto State.

"There's no metal on it. The whole thing is just layers of foam," Lauren Rust, founder and executive director of the nonprofit, told the Charleston Post and Courier. "It also doesn't look like it's been in the water that long. You'd think if it were in the water [for a long period of time], it would be covered in barnacles and all sorts of [sea life]."

Officials have since taken the strange object away in order to investigate the matter and possibly solve the mystery of its origins.