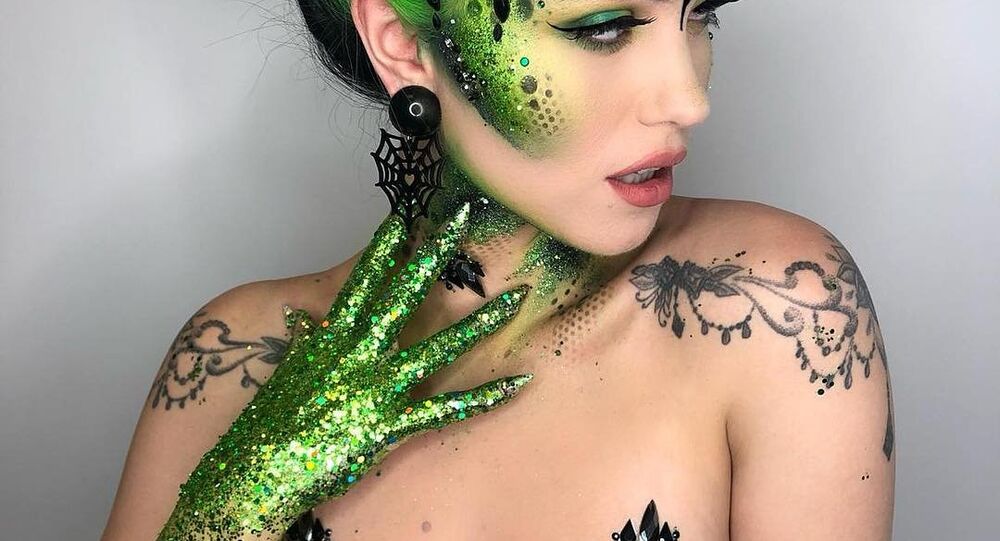 Glitter Boobs, Pumpkin Bums and Other Trendy Halloween Looks of 2018

Those observing the holiday, tend to allocate time for decorating, carving pumpkins, stocking up on candy for trick-or-treaters and costume shopping. Professional step-by-step make-up tutorials and ready-to-wear outfits make Halloween preparations that much easier. So here is the latest in the world of All Hallows' Eve fashion.

Going back to basics, the Go Get Glitter cosmetics brand, has suggested keeping it simple and draw on one's own body parts.

Because you loved the #PumpkinBum so much.. Welcome the #PumpkinBoobs🎃🎃 TAG A FRIEND THAT NEEDS TO ROCK THIS FOR #HALLOWEEN ✨

Wow! What a response we’ve had to our #PumpkinBum 🎃✨ Check our story to see all the write ups about it! Who’s brace enough to try the #BatBum 🦇🙋🏻‍♀️

A different pumpkin look was hailed by commentators online, as one user ironically told their friend: "let's just do something super subtle like this for Halloween."

🖤✨Absolutely loving the #Pumpkin looks this #Halloween!! What else do you want to see us create!? 🎃🕷

"You're just a regular Joe Schmo. But you are still going to be making one heck of a grand entrance. Because the president has agreed to give you a piggyback ride! We're not sure why POTUS has bestowed this presidential piggyback ride to regular old you, but we think you should enjoy it while it lasts!" an online costume retailer urges.

Another costume "creates the illusion of you being held up, with an oversized head that sits behind yours," a UK retailer said in the description section. That mentioned head looks very much like it belongs to the US President Donald Trump.

A not so subtle reference to the Russian President was made in another "political" costume. Its description calls on the wearer to "take command of any situation by teaming up with a comrade this Halloween!"

"With the two of you teamed up this Halloween, we're sure there's not much you can't handle!" the product information section reveals.

More common and widespread costumes of superheroes are still in demand, especially those who have dedicated films released in the recent past.

The Wonder Woman costume is the most-searched for costume in the United States this year.

Halloween is marked on the final day of October, with celebrations usually lasting a couple days before and after, depending on whether it falls on a weekday or weekend.