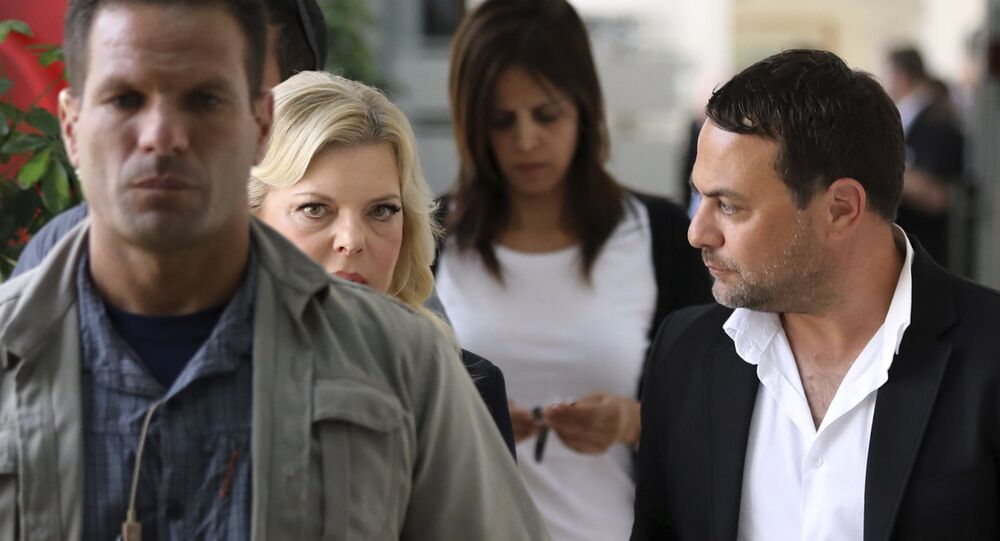 © AP Photo / Richard Drew
Iran's Zarif Shrugs Off Netanyahu's Secret Nuke Storage Claims as 'Smokescreen'
Israeli Prime Minister Benjamin Netanyahu's wife, Sara Netanyahu, on Sunday showed up in court to begin her trial for fraud and breach of trust, in a continuing saga of the multiple scandals involving her husband and family.

In another of her several appearances in court over the past several years, Mrs. Netanyahu did not speak, prior to the judge ejecting members of the press.

Allegations against Tel Aviv's first lady include blowing some $100,000 of the state's money on famous chefs to cater for the couple and their family at their official residence, although a full-time chef is already on the payroll.

Mr. and Mrs. Netanyahu — as Israel's preeminent power couple — are also accused of demanding expensive French champagne and Cuban cigars from associates as a means of greasing the wheels of favoritism in Tel Aviv.

In recordings from police investigations leaked to the press, the PM's wife was heard to curse her kitchen staff and complain about the quality of the food at the official residence.

The Israeli prime minister's wife has been previously accused of abusive behavior and over-the-top spending. A court ruled in 2016 that she had abused one of her housekeepers, and was fined a reported $42,000.

Former employees of Sara Netanyahu have noted many instances of mistreatment, and have accused her of finding creative ways to make the government pay for her extremely expensive tastes.

Tel Aviv Prime Minister Benjamin Netanyahu suggested that the allegations against his wife are "baseless and delusional," cited by the Guardian.

In the words of her indictment, Mrs. Netanyahu actively sought "to circumvent the rules and conditions" surrounding the logistics of the Israeli PM's official residence "in order to fraudulently obtain state funding for various expenses for the accused and her family that were not supposed to be financed in this manner."

Lawyers for Netanyahu argued previously that she was oblivious about household regulations — a claim shown by legal experts as unlikely, given her long tenure in the public eye and at the top levels of government.

Sara Netanyahu could be facing up to five years of jail time if she is convicted, although pundits and observers of Tel Aviv political culture suggest that she will at most be inconvenienced and receive a judicial rebuke, something that could only hurt her pride, not her bottom line, according to the Guardian.

The Israeli first lady's trial is only one of many facing their family, as opponents and members of the media increasingly portray the Netanyahu administration as being out of touch with Israeli citizens on the street.

Police in Tel Aviv on Friday questioned the Israeli PM over a period of hours in a separate ongoing investigation into widespread accusations of corruption by the 68-year-old politician, including selling influence for good press to Israeli telecom giant Bezeq and accepting expensive gifts from wealthy power brokers in exchange for favorable regulatory treatment.