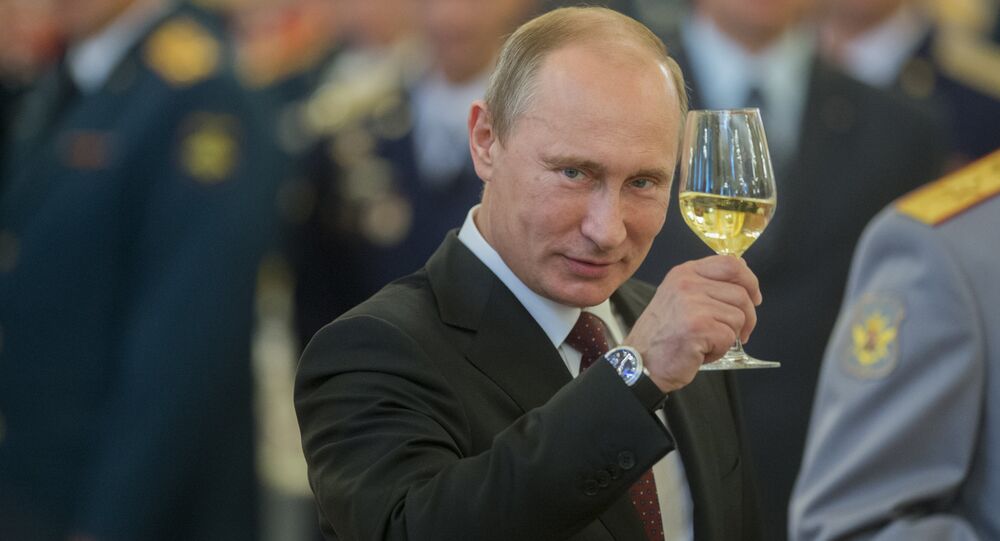 Happy Birthday, Mr President! How Putin Was Toasted on His Birthday

The Russian president has received a variety of exotic birthday gifts during his career, including the statue of a creature that “never backs down” and a live tiger.

"We wish you good health, and hope that you will continue your work – the work that helped change our world," Fallico said in Russian, shortly after Italian pop singer Toto Cutugno performed the famous Russian romance song "Dark Eyes".

​Taking stock of this development, Sputnik recalls some of the more extravagant birthday gifts and wishes that Putin received over the past two decades.

In 2002, then-President of Moldova Vladimir Voronin presented Putin with a crystal statuette of a crocodile, stating that “a crocodile is the only animal that does not back down.”

In 2008, during his tenure as the prime minister, Putin was gifted a two-month old Siberian tiger cub. The little tiger was later donated to the Safari Park in Gelendzhik.

© Sputnik / Aleksey Nikolskyi
Prime Minister Vladimir Putin presented to journalists a tiger cub which he was given for his birthday on October 7.

In 2013, Vladimir Putin was attending the APEC summit in Bali during his birthday, where he was toasted by the attending world leaders who sang “Happy Birthday to You” for him. The Russian president also received a gift of sake from Japan’s Prime Minister Shinzo Abe, while Chinese President Xi Jinping brought him a cake.

A Duvet Unlike Any Other

And in 2017, Silvio Berlusconi brought Putin a gift of a custom-made duvet which featured a life-size image of the two statesmen shaking hands, with a backdrop of Russian and Italian landmarks.

Kremlin Spokesman Reveals How Putin Will Spend His Birthday