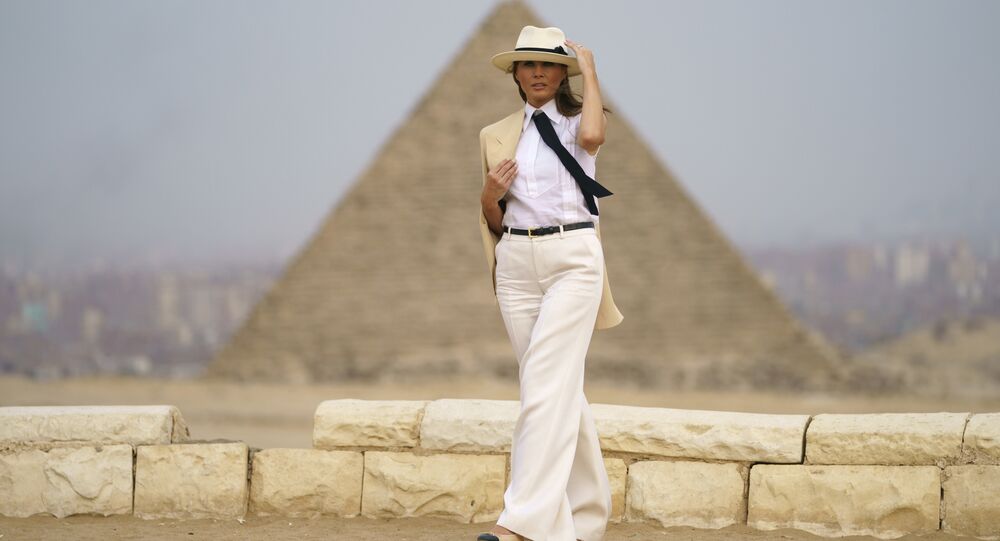 The US first lady has reportedly finished her first solo foreign trip to Africa with flair, making several statements that are discordant with the POTUS, while donning another “chic adventurer” look prompting a new wave of jokes on social media.

While making the final stop of her 5-day African trip in Egypt, US First Lady Melania Trump said that she doesn’t always agree with her husband’s tweets, and she tells him that, according to Reuters.

She was also reportedly asked about negative comments regarding Africa, attributed to the President. In spring, Trump met a barrage of criticism across Africa and beyond after it was reported that he privately referred to a number of the continent’s states as “s---hole countries.” Melania Trump said, as quoted by an NBC reporter, that she “never heard” him use such language, and the derogatory comments didn’t come up at all during her week-long visit to Africa.

NEW: Just asked @FLOTUS about her husband’s reported “shithole countries” comment. She said she “never heard” him use such language and told me the derogatory comments didn’t come up at all on her week-long visit to Africa. (Oh also, we’re at the pyramids.) pic.twitter.com/GMxesAmS0C

Trump’s alleged remark and the uproar, which followed, cast a shadow over Melania’s first solo trip, as she was reportedly greeted with a sign reading “#NOTASH**HOLE!" in Malawi, her second stop on the tour.

READ MORE: 'No Way': Melania Refused to Appear on TV With Trump After Leaked Tape – Reports

Outfits Melania Trump picked for her journey also got particular attention. After she came under fire on social media for wearing a pith helmet in Kenya, some slammed as a symbol of colonial times and racial segregation, her clothing choice for the Egyptian visit garnered a sarcastic response on Twitter.

Her “chic woman in Africa” look with a white hat, shirt with a black tie and trousers triggered an avalanche of pop-culture references, as users compared the first lady to movie villains and heroes.

melania dressed like the bad guy from 'raiders of the lost ark' on her visit to the pyramids pic.twitter.com/Cww6eausdx

"Melania, why have you come to Egypt?"
"Not to steal the sceptre Anubis so I can bring forth eternal night and chaos upon on the realms of man"
"what"
"AND FOR FORTY YEARS PLAGUES WILL RAVISH THESE LANDS AND I SHALL RULE"
"Melania"
"Sorry, to meet diplomats and stuff" pic.twitter.com/B4LP6dKMML

Seems like Melania Trump is going to the Indiana Jones casting call while traveling in Egypt. #indianajones

I get what she's saying, but she probably shouldn't be dressed like the villian from Overdrawn at the Memory Bank when she says it. pic.twitter.com/w4aSsBAprB

Some suggested the pop-king Michael Jackson inspired the look.

Melania literally googled 1920’s+ Egypt + archeology. This is not fashion. This is play acting. pic.twitter.com/JMqJKiqQ5o

However, some praised her clothing choice, branding it as a fascinating statement.

. @FLOTUS steps off the plane in Egypt wearing a menswear-inspired look, complete with necktie. For me this a fascinating fashion statement for a country with a very poor record on women’s rights. In the politics of fashion realm, she’s sending a message: Women are equal. pic.twitter.com/WA04VwDHV1

Commenting on this particular attention to her looks, Melania Trump reportedly told journalists in Egypt that she wished people would focus on what she does, not what she wears.

Over the last 5 days, FLOTUS Melania Trump has also been to Ghana, Malawi, Kenya, focusing her tour on child welfare and thereby seeking to promote her May initiative Be Best, which is already in full swing back home.