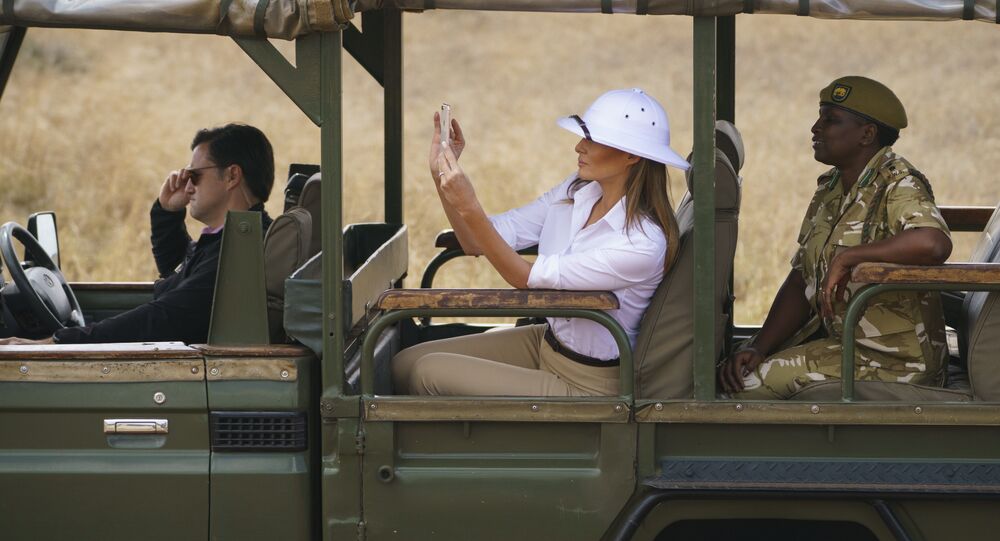 Following the PR disaster surrounding the ‘I don’t care, do u?’ jacket Melania wore on her way to a migrant child center, the first lady is in hot water again for one particular piece of her safari outfit during the Kenyan trip which evoked unpleasant memories of colonial rule in Africa.

US President’s wife Melania Trump has prompted a social media storm with the “chic woman on safari” look she picked for her African tour, which happened to be her first solo foreign journey. She’s been seen wearing chinos, safari jackets, riding pants and boots as well as cotton shirts and khaki linens, but it was the white pitch helmet she wore on the day before her departure that enraged some netizens and startled others.

Photos were released of Melania sitting in a safari vehicle, taking photos of giraffes and zebras in the national park in Kenya and eventually stopping by a site where tons of ivory had been burned to battle poaching. However, it was her hat which triggered a predatory response online, as many users rushed to slam the first lady for her perceived insensitivity.

Meanwhile, Melania is swanning around Africa in a friggin' pith helmet. RMESHTATPOOMGH*

*rolling my eyes so hard they're about to pop out of my goddamn head pic.twitter.com/7u9bfbGQhe

​Some described the pitch helmets, made of material called sholapith, as a part the brand image of the European explores and imperial administration of the colonial times in Africa and a symbol of racism.

The pith helmet is sometimes used to denote a “frontier” spirit of adventure & exploration. This is wrong. Their historical social role was to emblematize white fragility and anxieties, as well as blurring the distinction between white civilians & colonial police/army. 5/

​Others jokingly slammed Melania for striking the colonial bingo and ridiculed her whole ensemble.

Must know who advised Melania to wear a pith helmet in Kenya. Is it on loan from a museum or custom made to complete the “19th century colonizer” look? pic.twitter.com/Sy7n3URWIB

​Criticism of outdated understanding was also a popular rebuke.

Melania: What should I wear on my Africa trip to pay tribute to the culture and history of my hosts?

Melania Trump wearing a pith helmet on her trip to "Africa" is more than a silly sartorial choice. It's a reflection of her outdated understanding of Africa. (Also, she was photographed in safari attire multiple times on this trip.) #FLOTUSinAfricaBingo https://t.co/aCnkOnPBF8

​Many connected Melania’s faux pas to the infamous statements, attributed to her husband Donald Trump, who reportedly referred to African countries as “sh**holes.”

Would someone pls send this disgrace back to her #shithole country. She should never be let out again. #MelaniaInKenya https://t.co/ymuWh722jT

​However, some still tried to defend Melania Trump, stating there’s no racism in the pitch helmets often worn by Africans themselves.

So Melania Trump wore a "pith helmet" in Africa! Racist! Well, uhm, it was actually a "sun helmet," different than a pith helmet. And it's not racist, as I illustrated here….. pic.twitter.com/B67X2K9sXq

​The first lady was at the center of another “clothing controversy” this summer, after she wore a designer khaki jacket with a print on the back reading: "I really don't care, do u?" as she departed to visit a migrant child center in Texas. After media and social networks exploded in outrage about the alleged "hidden message," her spokesperson Stephanie Grisham dismissed all allegations, saying it was just a piece of clothing.