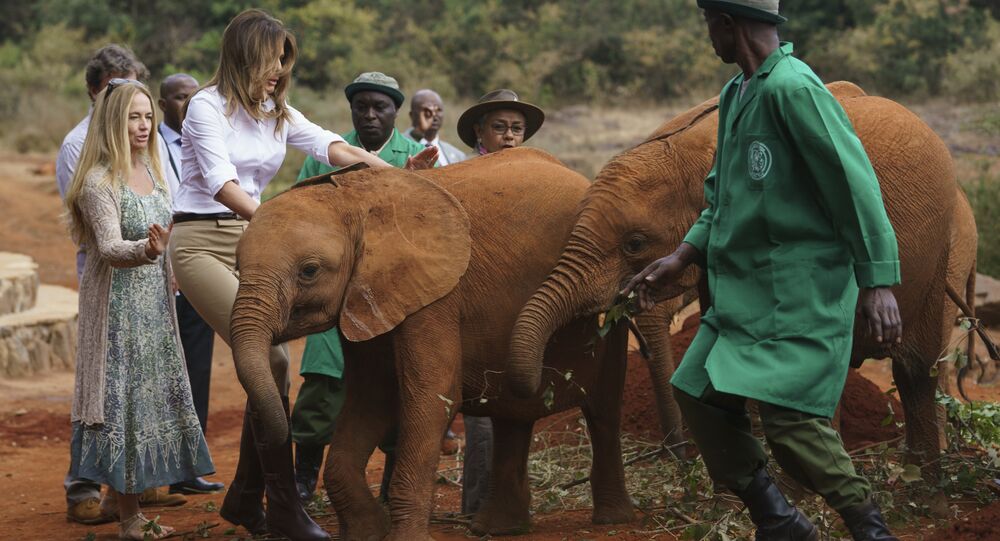 All eyes have been on the First Lady during her week-long solo trip to Africa, which has seen her promoting a child welfare agenda in Ghana, Malawi, and Kenya.

Melania Trump's visit to the David Sheldrick Elephant Orphanage in Nairobi, Kenya on Friday was briefly interrupted by a baby elephant who bumped into her after being pushed by a larger elephant, prompting her to jump back and her Secret Service escort to jump in to respond.

Moment of panic for US First Lady Melania Trump after a playful baby elephant ran into her during a visit at the David Sheldrick elephant orphanage pic.twitter.com/pmrqkcMBb1

Nonplussed, the first lady continued the press op, feeding two baby elephants a mixture of baby formula, coconut and porridge with a large baby bottle and speaking with the orphanage's curators before continuing her tour.

Meanwhile, on Twitter, Melania's encounter sparked anger, with users accusing the first lady of "another hypocritical Trump photo-op" and pointing to her stepsons Eric and Don Trump Jr's selfies with African animals they have killed, including elephants.

Just another hypocritical Trump photo-op! Melania is shown lovingly feeding a baby elephant. But her step sons, dumb and dumber, enjoy murdering beautiful, and at times, endangered animals in the very country Melania is in!!!! pic.twitter.com/PPnIPy78gS

Others recalled President Trump's executive order lifting a ban on bringing trophies of African animals into the US.

Just can’t get these images out off my head. Dose she know her husband delayed the decision of the import of animal trophies? pic.twitter.com/4JpYxsmXW6

A few users recalled the Trump family's hit or miss history concerning endangered animals, including the famous video of Donald Trump being threatened by a bald eagle in his office in Trump Tower.

Finally, some users came to the first lady's defense, saying they were proud of the "dignity and grace" with which she carries herself, and her efforts to raise awareness of the poaching issue.

This is worth putting on my bucket list — Rock-On Melania! Always proud of you representing America beautifully, with dignity, & grace 🇺🇸⚓️👍💪👏

@FLOTUS thank you for visiting @DSWT and bringing awareness to the illegal ivory trade!