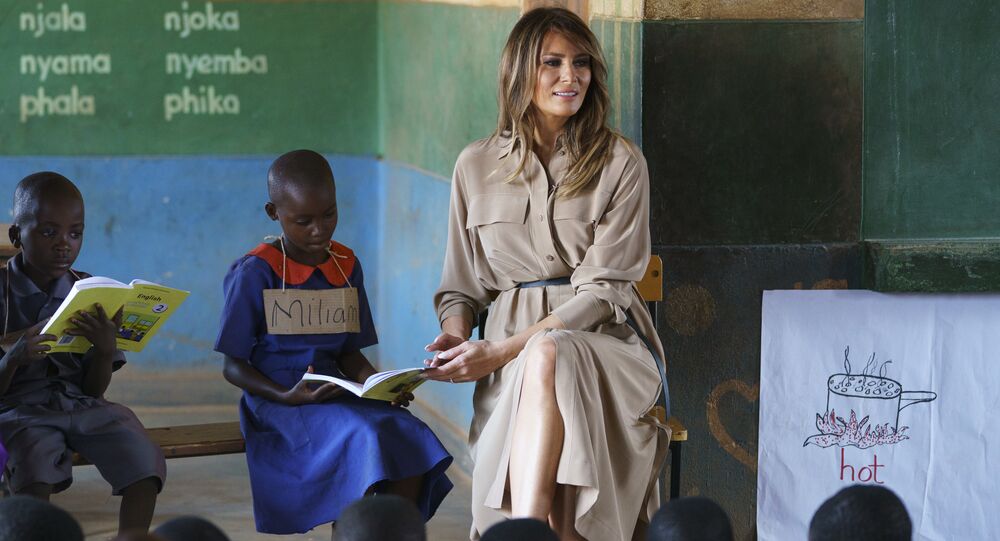 Residents of the African country of Malawi greeted US First Lady Melania Trump in a truly uncanny way, holding signs and banners bearing references to her husband’s earlier outspoken remarks.

According to an AP report, one woman among the demonstrators, who were white, raised a sign featuring "#MELANIATOO," with the first letters, ME, written in bold, in black ink. Another sign reportedly read “69 Days Past the Deadline to Reunite Families,” obviously referring to the White House’s “zero tolerance” immigration policies, which raised controversy earlier when reports arrived on family separations on the American border.

Among signs of welcome for Mrs Trump in Malawi, press pool spotted a sign along her motorcade route: “Welcome to Malawi #notashithole” — a reference to the word reportedly used by Pres Trump in reference to immigrants from some African countries. He denied saying the word.

Another couple recalled Trump’s remarks on the corners of the world that he referred to as “sh**hole countries,” making it explicit that they really welcomed Melania in Malawi, noting, however: “#NOTASH**HOLE!"

In spring, Trump met a barrage of criticism across Africa and beyond after he privately referred to a number of the continent’s states as “s---hole countries,” but declared at the United Nations as recently as last week that both he and his wife “love Africa.”

FLOTUS Melania Trump is currently on her first major international trip unaccompanied by her husband, focusing the five-day African tour to Ghana, Malawi, Kenya and Egypt on child welfare and thereby seeking to promote her May initiative Be Best, which is already in full swing back home.

How Trump Amassed His Fortune: An Insight Into American Capitalism