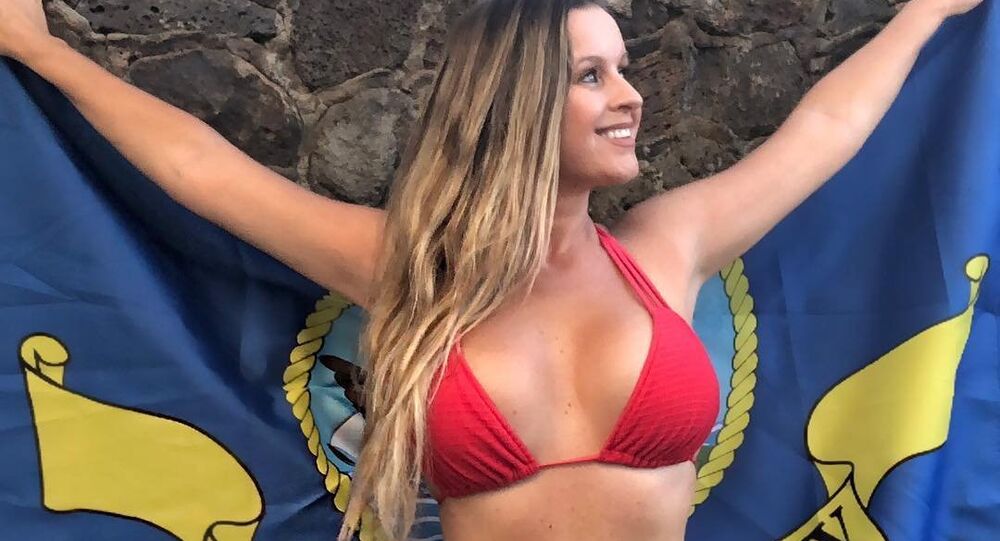 As a teenager, 36-year-old Janae Sergio used to be in and out homeless shelters in Los Angeles before she eventually joined the Navy, which she credited for giving her hope to change her life.

Janae Sergio, a formerly homeless US Navy veteran, who has always wanted to be in the fashion business, is now vying to grace the cover of the men’s magazine Maxim – and she’s doing it for a noble cause.

In the event of her win, Sergio, who’s currently an assistant business and financial manager for the US Pacific Fleet, will use some of the $25,000 prize money to help young people living in poor conditions to change their lives.

“I joined the Navy at 18 from a homeless shelter in Los Angeles. I always dreamt of being a model, but my life took a drastic turn when I became homeless at age 15. I have been working tirelessly to change my story and my passion is to inspire those who are currently running out of hope for their futures,” she wrote on her profile for the competition.

While your biggest concern in high school was who liked who and getting good enough grades to appease your parents, I was busy loading up my backpack to be shuffled from a drop in shelter to the nearest day shelter. While you threw spitballs at your buddies and planned for parties, I waited in line at @myfriendsplace to get a bag lunch and access to a computer to learn life skills. While you were scrambling to get into the most prestigious college, I was pleading with a recruiter to give me a waiver so I could enlist in the Navy and change my story… I struggled before I served in the Navy, but those 8 years of service have really helped me to transition into a purposeful life. And, thanks to all of you, I now have a platform to help others regain their footing in life. Thank you for your support, and hopefully when we win this @maximmag contest we can watch hundreds of wounded warriors be blessed with a much deserving roof over their heads. Unlike many of those beautiful women, I’m not doing the contest for personal gain. I have a successful career, but my life has purpose and my dream is to fulfill that purpose on the broadest spectrum possible. Thank you all for the unwavering support 🇺🇸❤️🇺🇸……… #homelessyouth #homelessness #fitmom #fitmilitarywomen #shecandoboth #curvesandcombatboots #bombshell #maximcovergirl #tattedmilitary #veteran #usnavy #cvn74 #hollywoodhighschool #cajonhighschool #losangelesyouthnetwork #myfriendsplace #bikinimodel #bodypositive @jah4ww

Janae will donate a portion of the prize to Hawaii-based nonprofit Hale Kipa that works to “better the lives of at-risk youth throughout the state,” and the Fisher House Foundation, helping families of wounded warriors.

“I didn’t have any hope for what my future would be. I was kind of living day to day and trying to figure out where I would sleep at night. The Navy gave me that future and gave me that footing to establish myself as a successful businesswoman,” she told the Military Times.

She admitted to the media outlet that her mother had left her at a shelter when she was about 16, and the only thing Janae could think about was survival.

“I needed to focus on surviving and establishing myself as a successful woman before I could think about (modeling),” she explained to the publication.

When Janae turned 18, she joined the Navy, and she was even deployed twice in the aftermath of the 9/11 terrorist attacks before ultimately getting out of the military in 2008.

“If you were to see me in person, I don’t look like a supermodel. In real life, I’m just a normal mom who goes to work every day and comes home and cooks dinner for the family,” she said, elaborating that she was initially concerned over her chances at the contest.

Janae, who has over 45.5k Instagram followers, has been trying to raise public awareness about homelessness with her participation in the competition.

“I think people underestimate how much at-risk youth need our time and our support. They don’t understand that these people have been abandoned. They’ve lost hope,” she said.

The competition for a spot on the cover of the international men’s magazine allows people to cast one free vote daily, as well as to buy additional votes for $1.

It’s not easy to break out of your comfort zone. People will tear you down, tell you you shouldn’t have bothered in the first place. But, there’s not much of a difference between a stadium full with cheering fans and an angry crowd screaming abuse at you. They’re both just making a lot of noise. How you take it is up to you. Convince yourself they’re cheering for you. You do that, and someday, they will……….. #murica #americanpride #patriot #patrioticbeauty #shecandoboth #femaleveteran #navygirl #sailor #sailorgirl #fitmilitarywomen #fitmom #tattedmilitary #maga #babesfortrump #maximcovergirlcontest

Part of the money is being donated toward building homes for wounded warriors; Maxim said it had already given nearly $750,000 to that end.