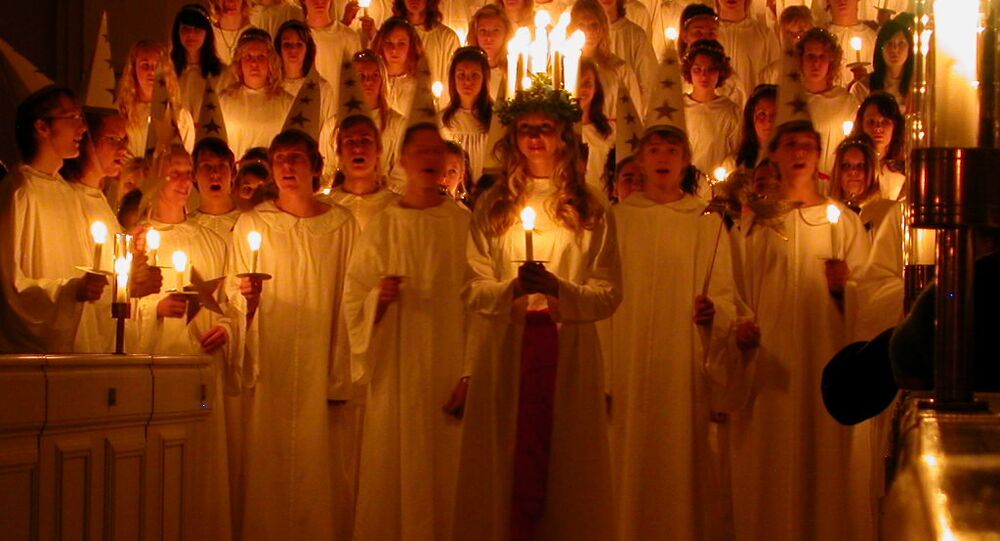 Swedes Sneer as Men Are Welcome to Personify Female Saint

While Malmö's administration has hailed this step as promoting tolerance and gender neutrality, ordinary Swedes have been largely uninspired by what they see as a lamentable departure from a quaint tradition.

Having long abandoned the requirement for the girl leading the candlelit procession on St. Lucy Day to be blonde, Sweden is ready to take inclusivity one step further by accepting men and non-binaries to this traditionally female role, the daily newspaper Sydsvenskan reported.

"We have simply decided that we do not want to limit ourselves to just women," project manager Viveca Byhr Lindén, responsible for arranging the St. Lucy procession in Malmö, said, stressing that the person sought-after needs to convey a sense of calm and serenity.

Previously, only girls and women could qualify for the honor to represent the medieval saint, Lucy or Lucia in Swedish tradition. This year, the requirements have been changed.

"Malmö is not chosen based on appearance or vocal capacity, but it should be a person who, over the past year, actively exemplified themselves as a good model and showed great commitment to the city and to fellow human beings," they read.

This year's Lucia, whether it will be a woman, a man or a non-binary person, won't need a singing voice either, as the musical part will be taken care of by students from the Malmö Latin School. Lindén said she was "proud that it is not a beauty pageant," but at the same time admitted that controversy may arise if a male Lucia gets to visit "elderly homes and hospitals," as is common the Swedish tradition.

The Malmö City Council admitted that its decision to embrace a male Lucia triggered strong reactions from the public, far from all being positive.

"I have received some emails; some conversations have also been made. Nevertheless, I think it's positive that people react and are engaged," Viveca Byhr Lindén said.

On social media, Malmö's efforts to promote inclusivity were met with skepticism. Swedes clamored that the spirit of equity was being reduced ad absurdum, whereas national traditions were being scoffed at. One user inquired sarcastically whether singing in Arabic was required, taking a jab at Malmö's image as Sweden's most multicultural city, where around half of the population have foreign background.

​Text: "Don't sit so man-normatively, Åke. They will be ashamed of you."

Others, though, expressed themselves in a supportive way, claiming that what Lucia had "between her legs" didn't matter.

READ MORE: 'Something Happened in Society': 1% of Young Swedes Up for Sex Change — Survey

Despite being an Italian Catholic martyr, Saint Lucy's day is particularly heralded in Scandinavia, where she is traditionally portrayed as having a stereotypical Nordic appearance and long blonde hair. In recent years, though, Swedish media have acknowledged a waning interest in the celebration.