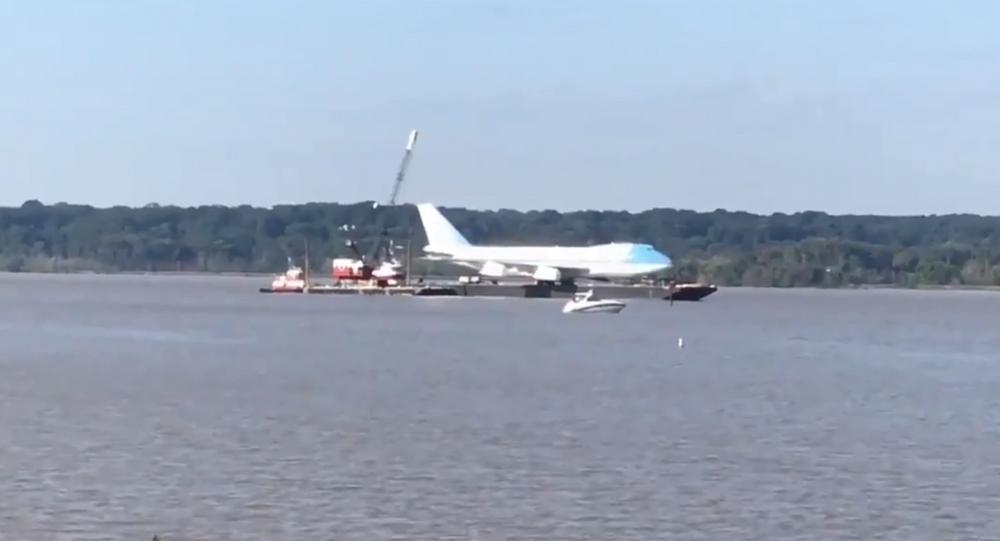 A decommissioned Boeing 747 modelled after Air Force One, the designated plane for US presidential flights, arrived at the National Harbor in Maryland on Monday for a history exhibit set to open in a few weeks.

The plane, which is part of the Children's Democracy Project exhibit, was converted into a museum at the Quonset State Airport in Rhode Island last year before officials floated the flightless bird down to Maryland this week, local Virginia news station WTVR reported.

According to the foundation, the "Air Force One Experience" exhibit will give children the chance to learn how democracy works in action. Also included in the exhibit will be artifacts from the days of American Presidents George Washington and Abraham Lincoln, as well as more recent ones dating since presidents took to the skies for travel.

​"It's a teaching aid to help children understand about democracy, using how the presidents travel as a means to explain it to them — everything from [George] Washington on his horse all the way through trains and carriages and up to Air Force One," Ross McLaren, of HLI Rail and Rigging, told WTOP. McLaren's employer is the company tasked with getting the replica to National Harbor.

Per McLaren, even "[President John F.] Kennedy's original seat from Air Force One is there."

After setting off on its voyage aboard a barge from Rhode Island's Narragansett Bay this past Thursday, the plane wasted no time in shocking dozens of locals as it made its way south to the Old Line State.

​"You never know what you will see when you go fishing on the Bay Quest," David Rowe wrote alongside a picture of the plane on WTVR's Facebook page. "Took this photo off of Lewisetta as we were leaving the marina to go fishing."

The plane will be made available to visitors starting on October 19. Tickets for the replica range from $15 to $30. The exhibit is expected to stay at the National Harbor through the holiday season.