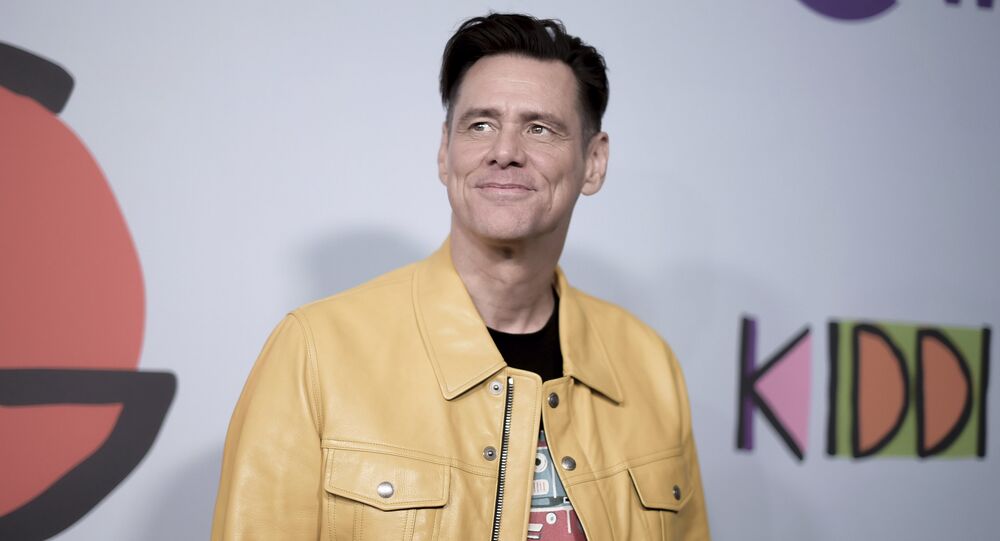 Two women have already come forward with allegations of sexual misconduct against Supreme Court Nominee Brett Kavanaugh, prompting mass protests against his nomination near the US Capitol building earlier this week.

Comedian Jim Carrey has weighed in on the scandal around Brett Kavanaugh, having tweeted a cartoon of the Supreme Court nominee wearing a mask over his face, after Deborah Ramirez became the second woman to accuse him of sexually assaulting her at a Yale dorm party.

READ MORE: 'I'm With Him All the Way' — Trump on US Supreme Court Nominee Kavanaugh

Colleges care more about donors than the victims of on-campus rape. That's why women don't report it and why ENTITLED LITTLE SHITS like Injustice Kavanaugh get to party and pillage their way to the Supreme Court.I'd like to suggest a new uniform for the highest court in the land. pic.twitter.com/9piWob4jGh

The tweet has received mixed reactions, with many supporting Carrey and thanking him for raising public awareness:

Thank you for speaking up. We need more of you. <3

A picture is worth a thousand words. A great artist always gets the point across.

Wow! Fabulous job on this Jim! You have brought out the evil in his beady little eyes! I can totally tell it is Brett Kavanaugh behind that mask!

Injustice kavanaugh is a great name!!!

Many others, however, maintained the “innocent until proven guilty” line, suggesting that the allegations should be corroborated:

You realize you’re part of entitled society? I guess you no longer believe in innocent until proven guilty? I thought that was a foundation of our justice system. Perhaps you would also like suggest a new for symbol for Lady Justice. This is what your advocating! pic.twitter.com/lrIJjWvI7d

Whatever happened to innocent until proven guilty @jimcarrey? #Walkaway

Innocent until proved guilty and guilty beyond a reasonable doubt actually mean something. Conviction in the court of public opinion is not the rule of law. One who makes an accusation must then support said with FACTS. The end.

Come on Jim, what happened to innocent until proven guilty, Due process, you know… the cornerstone of our judicial system? You can't say that people don't have something to gain by such inflammatory allegations. True or false, the damage is done

Some doubted the story of the first accuser, Christine Blasey Ford, who failed to remember the details of their allegedly unpleasant encounter:

I definitely don't believe her story she can't remember anything and niether can anyone else her story makes no sense why are we so ready to convict this man who has no indication of any such behavior yet her background shows her to be a protesting liberal…wake up!!!

Witnesses say no, she remembers nothing, her timing is suspect, and she refuses to attend a hearing where they moved heaven and earth to give Ford a multitude of options to tell her story. Excuse us if at this juncture we err on the side of Kavanaugh not doing it. ¯\_(ツ)_/¯

There were those who attacked Carrey by recalling that his ex-girlfriend had killed herself:

Jim Carrey calls Brett Kavanaugh "an entitled little s**t"
I understand how Jim's feeling. After all Kavanaugh's girlfriend committed suicide accusing him of having infected her with 3 STDs and then dumping her.
Wait…. That was you Jim Carrey. Oops?https://t.co/DYIyvmQjMA

Jim, what kind of stones are you casting? You caused a woman to kill herself after you infected her with STDs. Seriously, look no further than your own actions if you need to condemn how a woman was treated #Hypocrite

This is not the first drawing of Kavanaugh in Carrey’s “portfolio”: last week he tweeted another cartoon, alluding to the allegation by Christine Blasey Ford, who claimed that the Supreme Court Justice had sexually assaulted her back in the 1980s at a high-school party.

READ MORE: Several Arrested in Protests Against SCOTUS Nominee Kavanaugh at US Capitol

While Ford has alleged that Kavanaugh pushed her into a bedroom, held her down and groped her, keeping her from leaving the room before she eventually managed to escape, Deborah Ramirez claimed that Kavanaugh had exposed himself to her at a party at Yale.

‘I Was a Virgin’ – Kavanaugh

In a recent statement to the Senate Judiciary Committee, Kavanaugh has flatly rejected both allegations of sexual misconduct:

“These are smears, pure and simple. And they debase our public discourse. But they are also a threat to any man or woman who wishes to serve our country. Such grotesque and obvious character assassination – if allowed to succeed – will dissuade competent and good people of all political persuasions from service,” he said.

Most recently, Kavanaugh defended himself in an interview with Fox News Channel’s “The Story with Martha MacCallum,” claiming that he was a virgin throughout high school and college.

“We’re talking about an allegation of sexual assault. I’ve never sexually assaulted anyone. I did not have sexual intercourse or anything close to sexual intercourse in high school or for many years thereafter… The girls from the schools I went to, and I, were friends,” he said.

ICYMI on #TheStory Judge Brett Kavanaugh: "I've never sexually assaulted anyone — not in high school, not ever. I've always treated women with dignity and respect."

While Kavanaugh and Ford are expected to testify before the Senate Judiciary Committee on Thursday, US President Donald Trump defended his Supreme Court nominee:

“There’s a chance that this could be one of the single most unfair, unjust things to happen to a candidate but I am with Judge Kavanaugh… In my opinion, it’s totally political.”

The Democrats are working hard to destroy a wonderful man, and a man who has the potential to be one of our greatest Supreme Court Justices ever, with an array of False Accusations the likes of which have never been seen before!