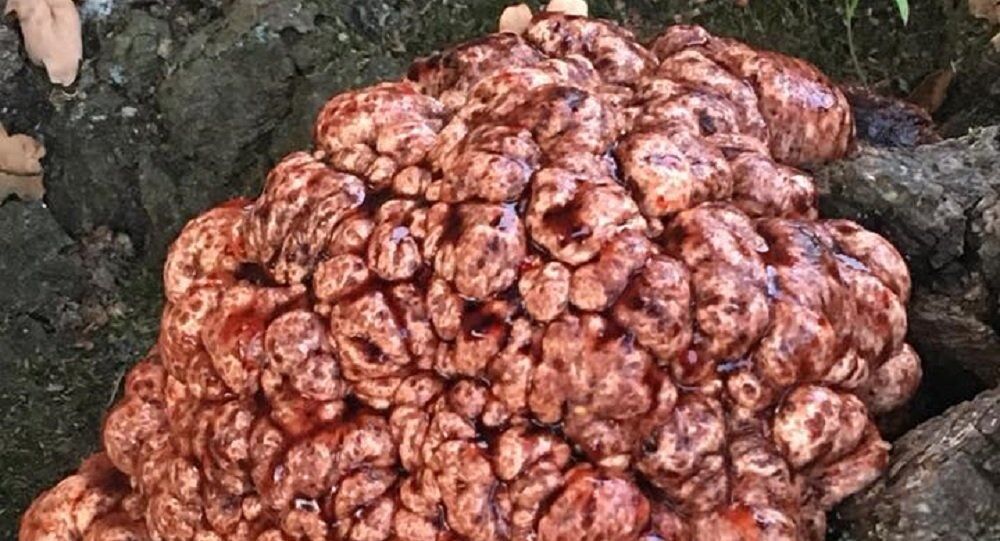 Even mushrooms experts were taken aback by the weird fungal growth accidentally discovered and documented by a Danish dog walker.

A horrid-looking growth resembling a blood-soaked brain spotted at the mossy base of a tree trunk has spurred debate on a Danish mushroom appreciation page (cllick here for more photos).

The bizarre growth, which oozed a blood-red liquid, was discovered by Præstø native Mette Knøsgaard, 39, who found the phenomenon outlandish and asked experts for their opinion.

"I was out walking my dog in the small town where I live when I saw this brain-like thing," Knøsgaard told the tabloid daily Extra Bladet. "I was very surprised. I had never seen anything like that. I thought it might be a part of the tree. It looked so wild, so I took a picture and posted it online to learn if it was a fungus at all."

Some mushroom aficionados identified the strange growth as a deformed ox tongue fungus, which is said to resemble a slab of raw meat. The fact that ordinary, non-mutated fungi of the same type were found elsewhere on the tree supports this version.

Others, though, ventured that the alien fungus could be a bleeding tooth fungus, which is known for having a white cap.

While the former is edible and is said to have a sour and somewhat sharp taste, the latter is inedible (although not toxic) and tends to form a symbiotic relationship with trees, providing them with minerals in the soil in exchange for carbon. Both are known to "bleed," that is, excrete red juice.

While mushroom experts quarreled about the nature of the peculiar fungus, users on Ekstra Bladet's comments page on Facebook tried to poke fun at the country's lawmakers.

"It is one of the 179 abandoned MP brains," one user wrote. To this, another one retorted that no one in Parliament ever had a brain, making it impossible to lose one.