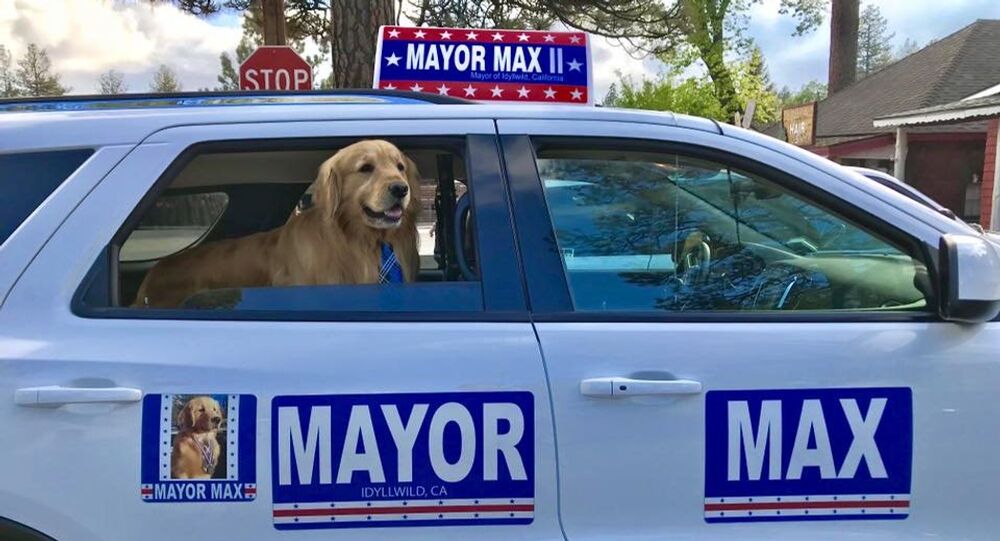 Commonly known by locals as Mayor Max, the incredibly cute tie-wearing golden retriever has been serving as the mayor of Idyllwild for five years now.

It may seem fur-real, but the small Californian town of Idyllwild has chosen a heart-crushingly adorable golden retriever with a noble name – Maximus Mighty Dog Mueller II – to be their mayor. Now there’s a politician one can actually trust!

“His role is to make the world a better place by conveying unconditional love and doing as many good deeds for others. My role as the chief of staff is to help run the vision of the mayor’s office for Idyllwild, so we actually run an actual mayor’s office,” ABC13 News cited Phyllis Mueller, Mayor Max’s chief of staff, as saying.

Mayor Max and his furry deputies, who, of course, are also golden retrievers, are distinguished guests at charity events, fundraisers and often turn up at ribbon-cuttings.

Maximus Mighty Dog Mueller II (Max) is a Golden Retriever and has been elected mayor of #Idyllwild, California.#mayormax pic.twitter.com/k2NndIfApV

Since Idyllwild is a non-incorporated town, it has no actual human mayor. Max has been in office for five years, having succeeded his uncle, who became the first mayor of Idyllwild in 2012.

That place where Golden Retriever Max is the mayor? Yep, that’s where I wanna be 🐶 pic.twitter.com/wPJk5in6eJ

“Six years ago, Idyllwild decided to elect its first mayor. You had to be a local resident, but you couldn’t run yourself, you could run your pet. In a voted election, 14 dogs and two cats ran and we decided to have an election to raise money for the animal rescue. So you paid $1 a vote and you were encouraged to vote a lot,” Mueller explained.

Social media users are absolutely smitten by Max, who will hold the ceremonial role for the duration of his lifetime – which couldn’t help but make the small town an attraction for tourists who would like to see the golden retriever that has become more than man’s best friend:

Yeah but I bet the cats are running things behind the scenes.

Mayor Max for President in 2020

Now there's a politician I'd trust! 😍