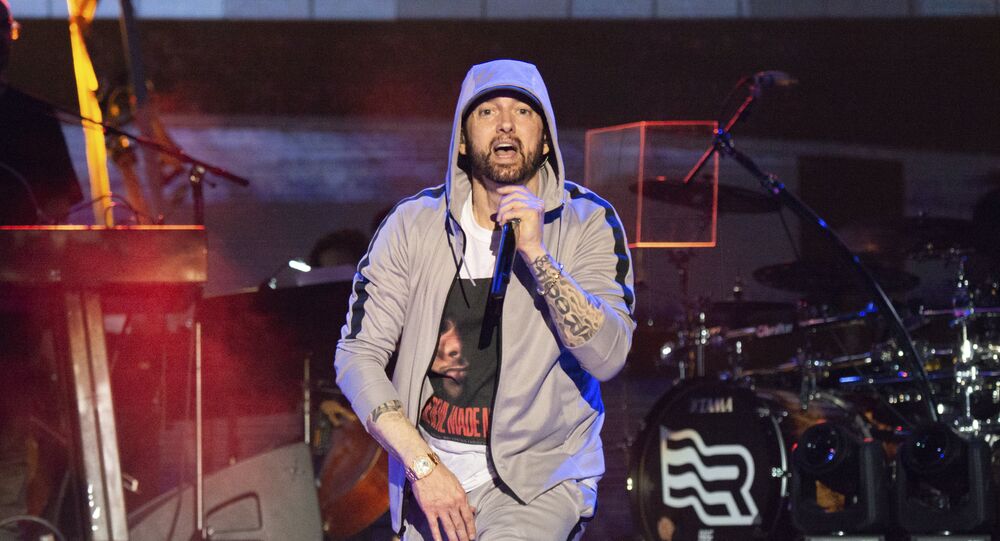 After getting dissed in Eminem’s latest album Kamikaze, Machine Gun Kelly hit back with “Rap Devil,” in which he claimed that Slim Shady had tried to blackball him from the rap industry once he read his 2012 tweet about Em’s daughter, Hailie, being “hot as f**k.”

Eminem’s assault on Machine Gun Kelly (MGK) in a blistering diss track, “Killshot” came just a week after the Cleveland rapper released “Rap Devil,” which, in turn, was a clapback to Em’s “Not Alike” diss featuring Royce Da 5’9”.

During his four-minute verbal onslaught, Eminem took aim at MGK, who once claimed that Shady was “too old,” and his career, launching a remorseless assault by boasting about his early success in the 2000s: “I’m 45 and I’m still outselling you/ By 29 I had three albums that had blew…/ I’d rather be 80-year-old me than 20-year-old you.”

In a final coup de grace, Em made a reference to MGK’s 2012 tweet about his at-the-time 16-year-old daughter, Hailie, whom Kelly described as “hot as f**k,” and alluded to Stan – the rap king’s biggest hit about an obsessive fan who killed his girlfriend and committed suicide: “Here’s that autograph for your daughter, I wrote it on a Starter cap/ Stan, son, listen, man, dad isn’t mad/ But how you gonna name yourself after a damn gun and have a man bun?”

Slim Shady’s lyrics have already blown social media up, with many saying that the 45-year-old legend had destroyed MGK:

Artists that are better than MGK:

I listen to Eminem’s diss on MGK prolly like 20 times…mind you I grew up a crazed Em fan.. Shady destroyed him…But I thank MGK for awaking Slim Shady.

Eminem: how you gonna name yourself a damn gun and have a man bun
MGK: pic.twitter.com/WjYyxrzWda

Eminem gave MGK a career and then destroyed it
😪😢😭#KILLSHOT pic.twitter.com/0F4NKchaUO

Me halfway through Eminem’s diss track on MGK #KILLSHOT pic.twitter.com/kiQ6CpRSy4

Eminem's album #Kamikaze hit No. 1 In 91 countries after 6 hours.@Eminem diss to MGK hit 25million views in 11hours, entering the top ten highest views ever and making Youtube to almost crash.

If that isn't a #KILLSHOT I don't know what is

As long as I'm shady you'll always be in my shadow??!!!!!#KILLSHOT pic.twitter.com/gPACLcHxMT

Others tweeted out hilarious gifs, memes and jokes about the “battle,” with some users even alluding to the Hollywood movie” John Wick,” starring Keanu Reeves, in which his character goes on a killing spree over his murdered dog:

#KILLSHOT
Doctor Strange: I have analysed 14,000,605 different possibilities
MGK: How many of them do I win a battle with Eminem in?
Doctor Strange: None pic.twitter.com/UQ513uCb6b

Eminem is John Wick. The moment MGK mentioned his daughter it was basically like killing John Wick's dog

Would you rather diss Eminem or Kill John Wick's dog? #KILLSHOT

Em’s colleagues and friends also couldn’t remain on the sidelines, weighing in to comment on the wild beef:

Don’t act like you didn’t know this would happen 🤭oh my what have you got yourself into. 🤨get the strap #lecheminduroi @Eminem 🐐 pic.twitter.com/LAfPiZ5UdG

I know we’re living in a generation of Hip Hop where everybody gets a trophy for participating like T-Ball,

Eminem killed that young man. I don’t see how anyone could possibly see these records as close competition.

The bad blood is said to have begun when Eminem discovered a 2012 tweet by MGK, in which the rapper reportedly tweeted some less-than-gentlemanly compliment to Hailie: “Ok so I just saw a picture of Eminem’s daughter… and I have to say, she is hot as f**k, in the most respectful way possible cuz Em is king.”

© AP Photo / Steve C. Mitchell
Eminem Takes Swipe at 'Agent Orange' Trump Over 'Sending Secret Service' After Him
Eminem reportedly took this as an insult, and six years later battered MGK in “Not Alike,” a track off his new surprise album, rapping: “And I’m talking to you, but you already know who the f**k are you, Kelly/ I don’t use sublims and sure as f**k don’t sneak-diss/ But keep commenting on my daughter Hailie.”

A few days later, Kelly fired back, dropping the song “Rap Devil,” in which he claimed Eminem had barred him from his radio channel, Shade 45: “Mad about something I said in 2012/ Took you six years and a surprise album just to come with a diss…”

im standing up for not just myself, but my generation. im doing the same shit you did back in ur day. life is still real on my side, and i had to take time from the grind to defend myself from someone i called an idol. love, Rap Devil.

In a recent interview with Sway Calloway, Eminem unloaded about the previously low-key feud, addressing the reason for the diss – and the remarks about his daughter appeared to be just the tip of the iceberg.