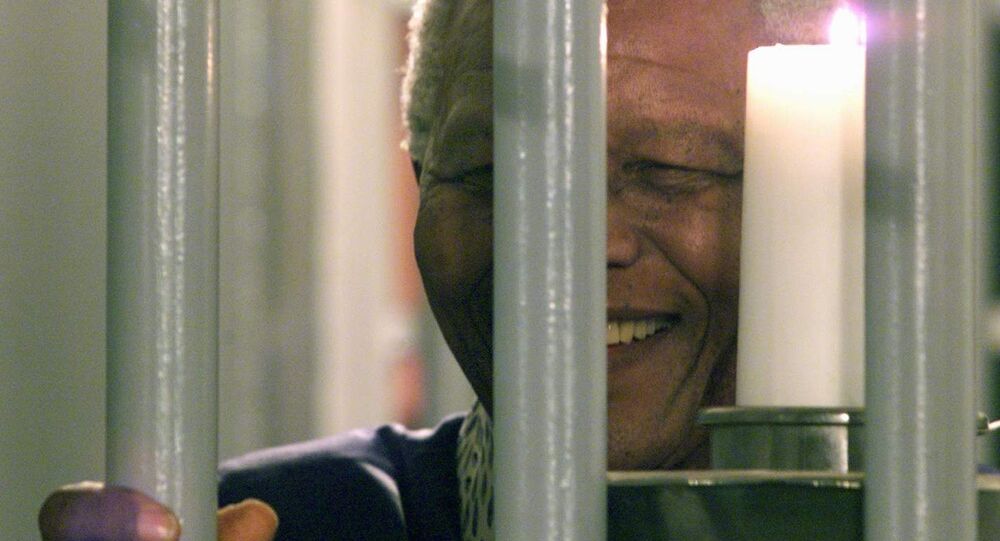 Attention-seeking South African artist Ayanda Mabulu has defended his new creation, a portrait of South Africa's first black president Nelson Mandela superimposed on a Wehrmacht flag including the Nazi swastika, claiming the criticism is based on Mandela's failed promises to improve the lot of poor black South Africans.

Mabulu's work, featuring Mandela giving the Nazi salute and the words "Unmasked Piece of Sh*t," was briefly displayed at Johanesburg's FNB Joburg Art Fair before being pulled. The Nelson Mandela Foundation called the work "deeply offensive" and said it is considering legal action against the artist, saying the work "goes beyond the reasonable limit" of freedom of expression.

Defiant, Mabulu told the BBC that "Mandela failed to deliver the dream" of equality, "and that makes him an equivalent of Hitler." "I do not have anything to apologize for," he stressed.

The artist's shock piece prompted strong reactions among Twitter users. While some wholeheartedly agreed with the Nelson Mandela Foundation's assessment, others agreed with Mabulu, accusing Mandela of betraying the anti-Apartheid cause and not touching the White minority's disproportionately large wealth. The debate soon degenerated into an argument about Mandela's origins, and his association with militants in the campaign against Apartheid in the 1960s.

Say what you about Mandela but he was never a mass murderer like Hitler he was never a Nazi this is not freedom of speech it's blatant direspect https://t.co/qw0OgFK75t

Can't some legal charges be brought against this guy? I'm sure the Mandela family & or maybe the ANC can have a point of contention here?!

This is extreme. Mandela may have been a lot of things, but comparing him to a Nazi is over the top. https://t.co/yleaW8dkkj

Yah but thats not what people mean when they call others Nazis. A Nazi is someone who supports white supremacy. Mandela somehow did because instead of distributing the wealth he has meeting with the Oppenheimer's and the De Beers.

I'm sorry on this but I support his freedom of speech or expression on this one. Why is it that we should not interrogate the Mandela legacy and what it means to the black youth today…

Many users emphasized that Mabulu was an "attention seeker," pointing to his previous controversial works, and urging fellow social media users not to get too carried away in their outrage.

The guy is an attention seeker and he always gets it by being controversial. Depicting Mandela as a NAZI will surely get the attention of the ANC and many people. He knows how to trigger emotions 😆😆 https://t.co/uM5t1V5JOq

Nothing " new now ", except the level the idiot is prepared to descend to get noticed!

Just very poor taste. if you want to prompt controversy as an artist, you must first understand it. There was no understanding here, no relationship between the elements, no connection, no audience either, just cheap, juvenile disrespect screaming for attention. That's not art.

Nearly a quarter century after the end of Apartheid, South Africa is in the grip of a new political crisis amid government efforts to expropriate land without compensation, with the campaign mostly targeting the country's minority white farmers. The expropriation initiative, justified by the government as an attempt to make up for the legacy of the country's discriminatory Apartheid-era laws, which enabled the country's white minority to accumulate some 72 percent of the country's farmland, have themselves been described as discriminatory. Some members of the white minority, which make up about 9 percent of the country, have warned that the land redistribution effort could lead to civil war.