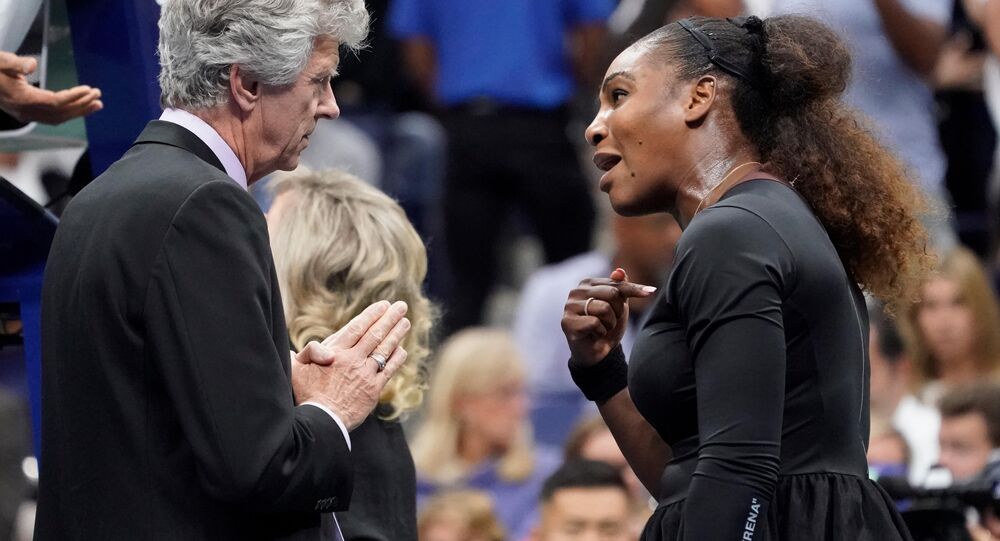 As a result of a conflict with an umpire during a recent US Open match, American tennis star Serena Williams received three code violations, eventually losing a point and then the whole game.

Herald Sun editor Damon Johnston has responded to accusations of racism over the Australian newspaper's Mark Knight depicting US tennis star Serena Williams in a cartoon, which Johnston claimed "had nothing to do with gender or race."

"A champion tennis player had a mega tantrum on the world stage, and Mark's cartoon depicted that," Johnston said, in a nod to Williams' recent dispute with an umpire during the US Open final over what she described as sexist treatment.

Johnston was echoed by Knight who insisted that "the cartoon about Serena is about her poor behavior on the day, not about race."

"I drew this cartoon Sunday night after seeing the US Open final, and seeing the world’s best tennis player have a tantrum and thought that was interesting. It's been picked up by social media in the US and my phone has just melted down. The world has just gone crazy," Knight added.

Serena Williams doesn’t wear earrings. Why is she wearing earrings in the Knight cartoon when this is an African American racist cartoon stereotype.

Can you not see that the lips on Knight’s cartoon are pretty much the same as the lips in the historically racist cartoon?

Meanwhile, Twitter users have remained at odds over the Australian newspaper's explanations, with some describing the cartoon as "certainly offensive," while others have claimed that it is "not racist or sexist" and that it "rightly mocks poor behavior by a tennis legend."

This was not a racist cartoon, J.K. It was a depiction of Serena Williams on court behavior. The cartoonist could not have drawn her image as anything other than that of an African-American. Otherwise, it would have been a false depiction!

Mark Knight's cartoon was legitimate, appropriate commentary on Serena Williams' childish, overbearing tantrum. It was NOT racist. @Knightcartoons is Australia's best cartoonist. We need fearless artists like him poking fun at the powerful for health of our democracy, society.

The cartoon made on #SerenaWilliams may not be right, however I don't find it racist or sexist, but coming to the point, the way she behaved with refree is unprofessional. Unexpected from a top player like her. 1/2

@Knightcartoons cartoon is not racist or sexist…. it rightly mocks poor behavior by a tennis legend… Mark has the full support of everyone @theheraldsun pic.twitter.com/KWMT3QahJh

If this doesn't qualify as a racist cartoon, what would? pic.twitter.com/gylVdtJi1W

that cartoon depicting Serena Williams stomping on her racket is the most racist, sexist thing I've ever seen in 2018. it's not far off from a Jim crow caricature, complete with the round lips.

As soon as I saw this I was shocked! It looks so similar to a 1930s style racist cartoon or postcard. I'm a 53 year old white woman from WI and it disgusted me on a few levels.
I'm not sure why other people don't see it.
I get how caricatures work, this isn't that!

@theheraldsun As an American & woman, I am deeply offended by the Serena Williams cartoon that you published. It is a gross, racist caricature of a woman who is arguably one of the greatest athletes of all time. The portrayal of Ms. Osaka as a blonde, white woman was also not on.

In the cartoon published by Knight on his Twitter page, Williams is depicted as a spoiled child who destroys her racket in a furious rampage because she is losing, with the umpire asking if her opponent can "just let her win."

According to CNN, the cartoon shows Williams having "large, exaggerated lips and nose reminiscent of racist depictions of black people in the US during the Jim Crow era," a reference to state and local laws enforcing racial segregation in some US states between 1890 and 1964.