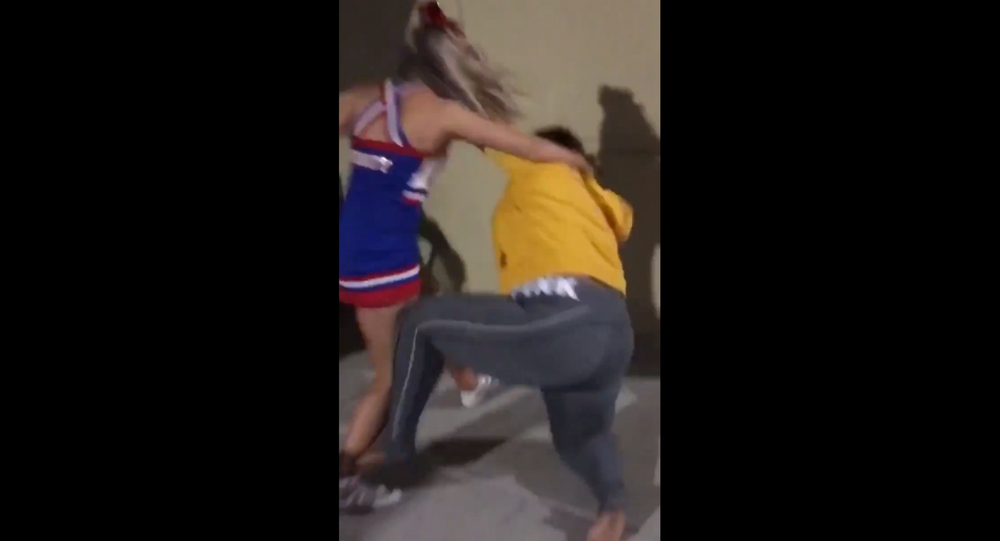 ‘Want to Fight?': Cali Cheerleader Hits Back After Being Slapped (VIDEO)

Footage of a pint-size cheerleader putting hands on another girl after being challenged to a fight on Saturday has gone viral, amassing more than 360,000 likes and 107,000 retweets on Twitter.

The recording, which was shared on social media by Sierra Sprague, the cheerleader's sister, begins with her sibling being aggressively challenged to a brawl while sitting with friends at a patio table. The fight ensues after Sprague is unexpectedly slapped.

The video was recorded by another person at the scene.

​"Do you want to fight?" the unidentified girl is heard asking Sprague, who rejects the invitation.

"No, nobody wants to fight," Sprague, still in her cheerleading uniforms, responds. "You want to fight us. Nobody speaks on you guys, nobody talks about you guys."

Moments after urging her opponent to step off for a second time, the pair begin exchanging blows with one another after Sprague gets slapped in the face. The two quickly gain an audience as they continue to slap, punch and throw each other on the ground.

The varsity cheerleader ultimately ends the fight after dishing several closed-fist blows to her counterpart. The recording ends after the two go their separate ways and members of the audience profess their love of "watching rumbles."

Sprague is a student at California's Clayton Valley Charter High School, according to the New York Post. Neither the school district nor officials from the cheerleading team have issued a statement on the brawl. In replies to the video, Sierra stated that her sister had not been reprimanded by the school for the altercation.