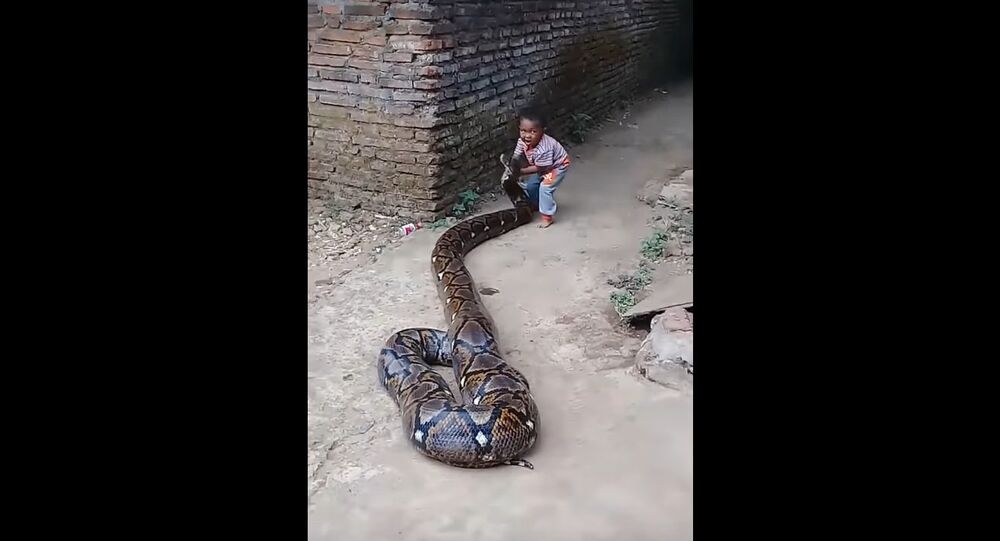 It’s no surprise that a toddler might be using the curled up reptile as an armchair, playfully approaching it and even stroking it on its spotted head, however, the adult reaction to all of this has been deemed by many as totally inadequate.

A controversial video has emerged of a little boy, playfully rolling around a python five ten times his size in the Indonesian Province of East Java. He appears to be wrapped up in the slithering body of the gigantic reptile, before rolling on top of it, standing up and grabbing the python in an iron grip merely inches from the snake’s head.

The footage features the boy’s giggling, with a distinct laugh heard from his parents filming in the background.

READ MORE: Massive Python Retrieved From Under House in Australia

Comments naturally arrived in abundance, with the vast majority of users who happened to see the video virtually at a loss for words over the parents’ ignorance of the potential hazards. One user even exclaimed the couple belongs in jail: ‘Those parents need locking up for allowing the child to do that’

Another one pursued nearly the same line of thinking claiming they should be completely deprived of parental rights.

"These people should not be allowed to have kids," he noted, with another commentator simply saying: “Disgusting!”

Others noted the repercussions would have been fatal had “that thing” been hungry. This prompted a lengthy discussion of hypothetic scenarios, with some even allowing themselves to resort to humor:

“One of these days the parents will be looking for the kid and the snake will be slithering around with a bulge in its belly,” one stated, whereas another poked fun at the sight:

“The snake is waiting for him to grow up or eat dinner first.”

Russian speaking commentators meanwhile pointed to the fact that in this part of Asia, it is more than normal to play with reptiles, before ironically questioning who would be eating what later on.

Meanwhile, there some have defended the parents, noting that pythons are really “chill and friendly” and pose no suffocation or other risks to humans or even animals.

“Why everyone's freaking out? Pythons are so chill and friendly and they don't even try to constrict humans or pets.”

WATCH Villagers Rescue a Giant Python Trapped Under a Car