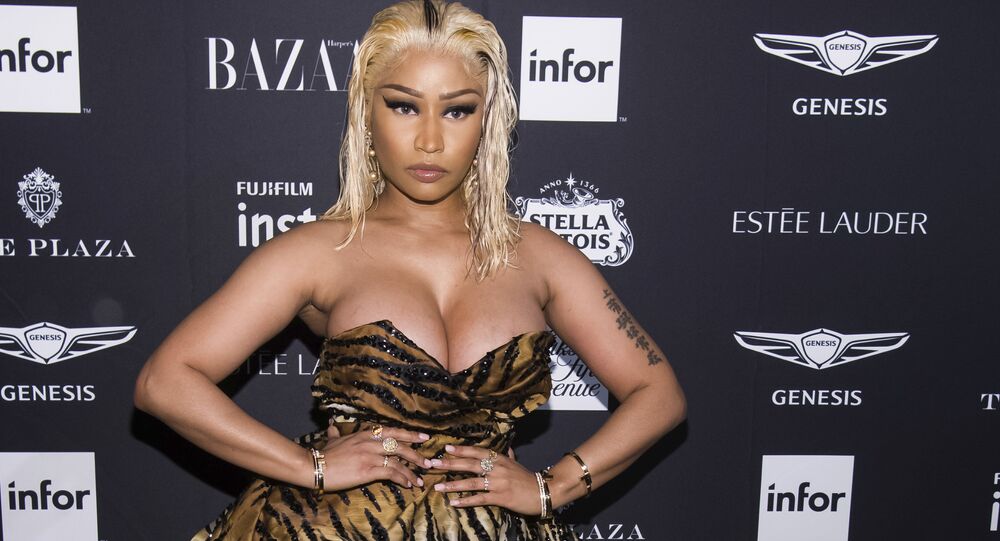 Female rap artist Cardi B has taken her feud with Nicki Minaj to a whole new level, targeting her bête noire at a New York Fashion Week party on Friday night, TMZ reported.

In the clip floating on social media, Cardi B is seen heading towards someone, who is believed to be Nicki Minaj, and being held back by security guards at Harper’s Bazaar Icons party.

According to the TMZ report, Cardi approached Nicki to confront her over “lies she was spreading,” allegedly after Minaj belittled her mothering skills, as Cardi can be heard shouting: “Say something about my daughter again!”

After members of the security detail tried to separate the two, Cardi took of her red shoe and hurled it at Nicki, who is seen being blocked up against a wall by several guards.

Cardi, however, missed her target, while Minaj “didn’t even flinch.” The outraged rapper was later escorted out by security, being left with a giant lump on her head after a security guard reportedly elbowed her.

The Twitterverse experienced a powerful quake once news about the bash between the rivaling rappers broke, with users not hesitating to share gifs and videos of what they assumed the encounter looked like:

Cardi b running up on Nicki Minaj at NYFW pic.twitter.com/oqjPfbdeFN

Others posted pics of Cardi’s bump while she was escorted out to prove it’s not photoshopped:

not photoshopped your fav got rocked pic.twitter.com/f1UtmCulkW

Threw a shoe, missed, and got a knot pic.twitter.com/5OdKuQWyvJ

Cardi B being escorted out of the Harper's Bazaar party in New York, after launching her shoe at Nicki Minaj, is a modern day Cinderella story. pic.twitter.com/dY2O62oeDG

…while some turned it into a meme:

Cardi B vs Nicki Minaj

Some twitterians, however, claimed that it was not Minaj who Cardi was fighting – but rather Rah Ali, B’s former Love & Hip Hop: New York TV show co-star.

Cardi B got in a fight with Rah Ali not Nicki Minaj that dress and voice clearly weren’t Nicki’s TMZ ain’t shit pic.twitter.com/FJ4vTR3Jwq

It was rah ali and cardi, enough with the lies damn

Other users weighed in to say that there is a version that Cardi wanted to confront Minaj, but Rah stepped in to defend the latter:

Cardi B and Rah Ali got into at the #BazaarIcons event. Cardi’s in the red dress. There are a million versions of what happen, with some people claiming Cardi wanted to fight Nicki but Rah stepped in. pic.twitter.com/kC11CAhhv9

Actually I believe Cardio tried running up but Nicki was with Rah Ali so they fought. You can see Cardi getting dragged though lol

It wasn't Nicki. It was Rah defending her after Cardi came up on Nicki saying "Lemme tell you something"

Meanwhile, others prefer to wait for Cardi to shed light on who exactly she was targeting, or at least for a clearer video:

Me waiting on Cardi B to get on Twitter and drop the tea about this alleged fight with Nicki Minaj and/or Rah Ali pic.twitter.com/PfLwptiS8x

me patiently waiting for a clearer video of Cardi B and Nicki Minaj fighting to appear on my tl pic.twitter.com/KbWZ2bZOkI

After leaving the party, Cardi B took to her Instagram where she did not call out Minaj by name but alluded to the incident, explaining that she had made some “comments about my abilities to take care of my daughter.”

Nicki Minaj, however, seemed to act nonchalant, posting glamorous pics from the fashion night out:

She hasn’t commented on the incident so far.