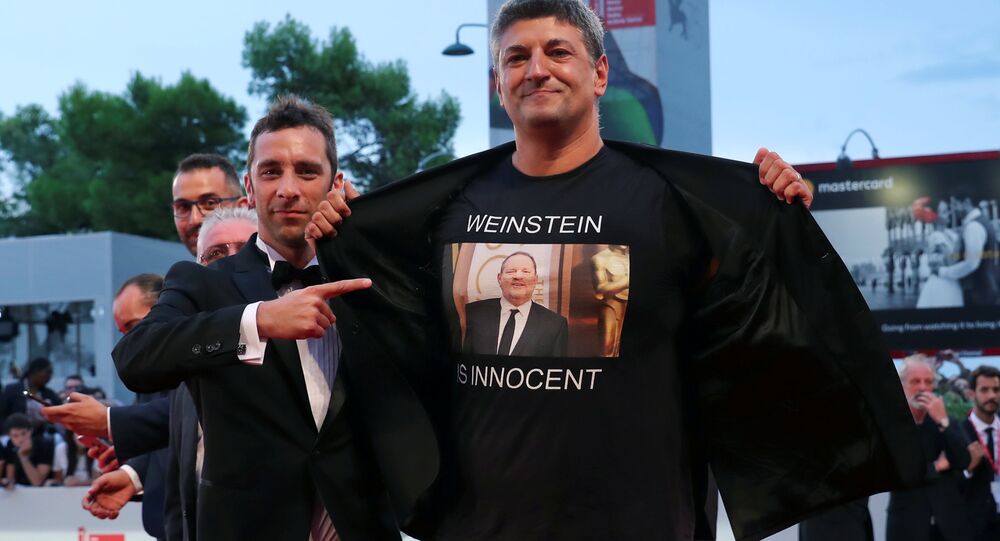 An Italian film director has spoken out against the "hypocrisy" by actresses, models and presenters who "accuse the accused" of sexual misconduct but omit important details.

Luciano Silighini Garagnani appeared at the Venice Film red carpet event wearing a T-shirt that said "Weinstein is innocent." Ahead of the premiere of Guadagnino's film "Suspiria," the director posed with fellow festival attendees pointing to the T-shirt and smiling.

Garagnani has reportedly criticized women who in their sexual abuse accusations avoid explaining "that they have obtained the role because someone, with different motivation and not for the real ability, put them in the right place at the right moment."

"If someone [really wants to] report the shameless and obscure world of the show business, it is the moment that actresses, models and presenters begin to talk, saying: 'I have this role because with a heavy heart I slept with….'It is only in this way that we will break the hypocrisy and we will defeat this despicable marketplace," the film director supposedly said.

Garagnani's appearance at the festival has stirred criticism online and claims it was a PR stunt by the film director.

Dozens of women, among them high-profile actresses and celebrities, have accused film mogul Harvey Weinstein of sex abuse, including rape. Most of the allegations date as far back as 1980. The accusers said they have not come forward earlier because of feeling ashamed and threatened to have their careers destroyed.

Weinstein has since been indicted on more charges, including two counts of predatory sexual assault, which carries a maximum sentence of life in prison.