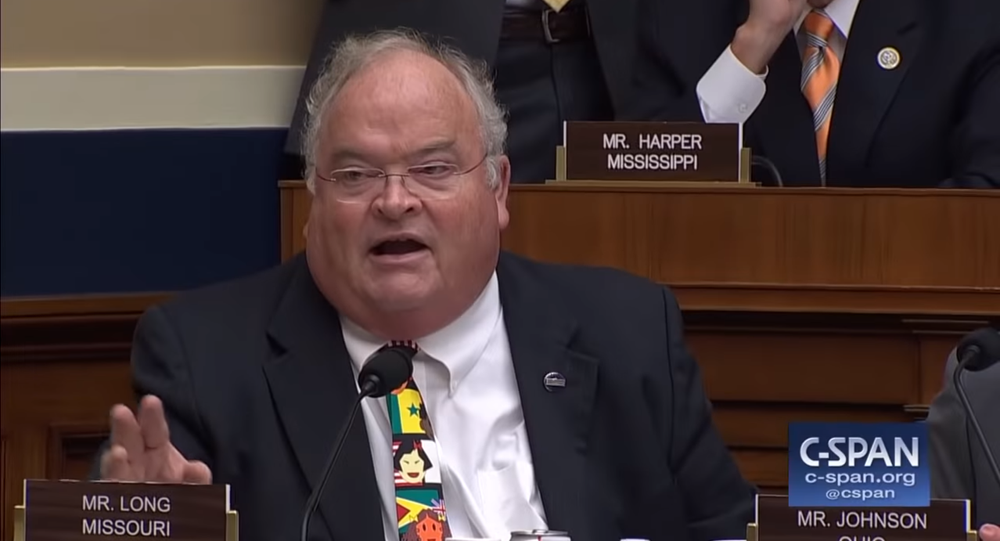 Alt-right activist Laura Loomer found an unexpected opponent in Rep. Billy Long (R-MO) Wednesday when she tried to interrupt a House Energy and Commerce Committee meeting and was greeted with an unusual skill from the representative’s other trade: an auction call that drowned her out.

The focus of Loomer's ire Wednesday was Twitter CEO Jack Dorsey, who was testifying before the committee at the time. In footage recorded by C-SPAN, Loomer stood up in the middle of the hearing and began to shout her belief that Dorsey is trying to turn the upcoming 2018 midterm elections in favor of the Democratic Party.

"Please help us, Mr. President, before it is too late," Loomer said, standing in the back row of the audience, "because Jack Dorsey is trying to influence the election, help the Democrats steal the election. That is why he is censoring and shadow banning —"

At that point, Long leapt into action, tapping into his trade skills as owner of Billy Long Auctions, LLC, and member of the National Auctioneers Association, rolling out an auction call of continuous speech that drowned Loomer out until she was removed from the hearing chamber.

​At one point during the impromptu mock auction, the Missouri congressman made clear that what was being auctioned off to imaginary bidders was someone's cell phone.

Once the protester was removed, Long calmly returned to Congressional hearing protocols, saying, "I yield back [my time]," to which the audience in the chamber applauded and laughed.

But this wasn't the only attempted exchange between Loomer and Dorsey Wednesday. Outside the building, Loomer begged the Twitter CEO to give her back her "blue check" verification on Twitter.

As Dorsey was entering his vehicle, surrounded by other press and security, Loomer was recorded shouting, "Mr. Dorsey, when can I have my verification back? I am a journalist!" Dorsey declined to answer her, closing his car door as the black SUV immediately drove off.

​Loomer lost her verification last November when Twitter purged her and a host of other alt-right figures, including Richard Spencer and Jason Kessler, of their credentials. The company had recently updated its policy, allowing it to remove a user's verification if their account "promotes hate" on the basis of "race, ethnicity, national origin, sexual orientation, gender, gender identity, religious affiliation, age, disability or disease," Fast Forward reported at the time.