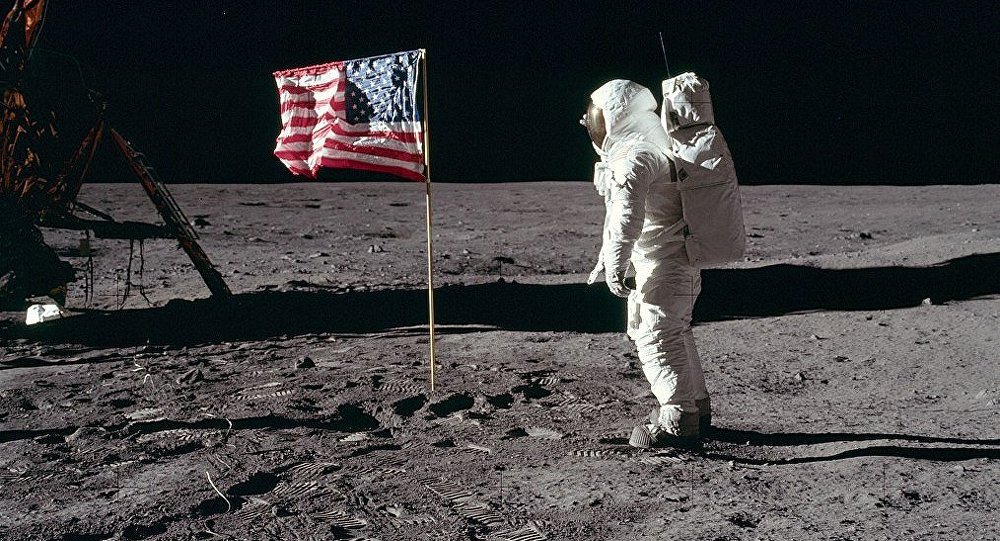 'The First Man', a new movie about the life of astronaut Neil Armstrong starring Ryan Gosling, has sparked anger among many Americans for apparently failing to show Armstrong sticking the US flag into the Moon's surface.

88-year-old retired astronaut Buzz Aldrin, the second human being to step foot on the moon during the historic Apollo 11 mission in 1969, expressed his disapproval with the movie with a tweet including the hashtag #proudtobeanAmerican and images of the astronauts planting and posing with the flag.

Aldrin, who has made his feelings about the importance of showing veneration for the American flag clear in the past, attracted the praise of other twitter users, who joined him in criticizing the film, and thanked him for his service.

I stand with Buzz Aldrin on this. I saw the Saturn 5 lift up and disappear into the sky. I was stationed in McCoy AFB. Saw the rocket from my base. It was a proud moment. I am upset with this movie. Inacurate with history.

You are a true pioneer, hero, and inspiration to many myself included.

I am proud to stand with you sir. I will not see the movie. Its an affront to whay you guys did, and to history!

Some users made sure to really emphasize the 'American' nature of the moon landing achievement.

Some also jokingly recalled the incident where Aldrin decked a conspiracy theorist who said that the Moon landings never took place in the face.

Not everyone was in a jingoistic mood, however, with some Twitter users suggesting that this manufactured anger was just an "excuse" to divide the country.

The flag is shown multiple times in the movie, just not the instant it was planted. Some right wingers chose that as yet another excuse to try to divide the country. Un-American.

Neil knew this was more about the mankind and not about nationalism, that's why he said "That's one small step for man, one giant leap for mankind" and not "one giant leap for America", & the scene in this picutres is pretty anticlimatic for a movie, they did this shot way later.

A few conspiracy theorists also joined in the fray.

One of the great actornauts…

© Flickr / NASA
Greatest 20th Century Conspiracy Theory Put to Rest? NASA Issues Moon Mission Audio
'First Man' Director Damien Chazelle emphasized that while the flag planting scene was "one of several moments" that he "chose not to focus upon," the film does "show the American flag standing on the lunar surface." Gosling, who portrays Armstrong, defended the omission of the flag planting scene, saying he thought "was widely regarded in the end as a human achievement, and that's how we chose to view it…I don't think that Neil viewed himself as an American hero. From my interviews with his family and people that knew him, it was quite the opposite. And we wanted the film to reflect Neil."

'First Man' premiered at the Venice Film Festival on August 29, and is set for US release on October 12.