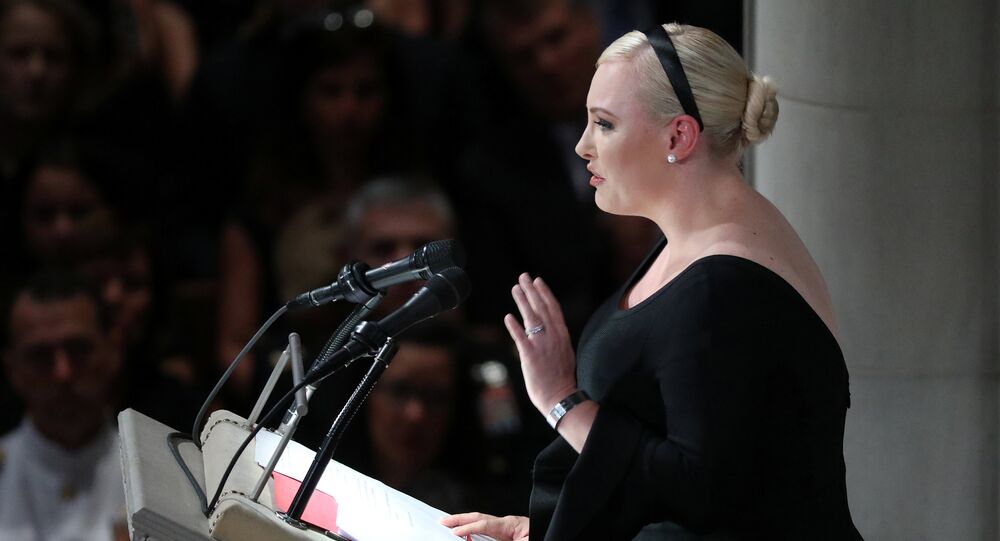 The Republican senator died on August 26 after stopping the cancer treatment that he had been undergoing for roughly a year. He and President Donald Trump were not on good terms after the latter said that the senator was not a "war hero" due to McCain having been captured during the Vietnam War.

Meghan McCain, the daughter of late Republican Senator John McCain, indirectly blasted President Donald Trump's policies during her eulogy at her father's funeral. She didn't name Trump directly, but instead made a reference to his popular slogan.

"America does not boast because she does not have need to. The America of John McCain has no need to be made great again, because America was always great," she said.

While recounting the accomplishments of her father, Meghan McCain appeared to take more personal swipes at the US president, scolding both his policies and him personally — again without referring to him by name.

"[John McCain was] the real thing, not cheap rhetoric from men who will never come near the sacrifice he gave so willingly, nor the opportunistic appropriation of those who lived lives of comfort and privilege," she said.

Many twitterians blasted Meghan for using the eulogy to talk politics and attack Trump.

Political theatrics instead of a mournful eulogy. Sad

@MeghanMcCain cheapened her father's funeral with hatred, too blinded by her grief to understand that taking the high road would have delivered a more befitting message to honor her father. #sad

America IS great again due to the vision of President @realDonaldTrump. #MAGA

& takes a cheap shot, classy. Expect nothing less from the McCain family

But a lot of Twitter users supported McCain's daughter's words and were impressed by her fiery eulogy.

She savaged him, without once mentioning his name.

That was so fucking awesome. Absolutely epic. I'm speechless

Some of them noted that her father, who was not on good terms with Trump, would be proud of her.

It was glorious. Her father would have been proud.

Several twitterians suggested that Ivanka Trump and her husband Jared Kushner, who were present at the funeral, must have felt uncomfortable during the eulogy.

She wiped the floor with him, several times in the faces of all the hypocrites sitting there but especially to john kelly, ivanka & jared

Oh my those eyes…..They could of started a fire. Staring at Ivanka Trump. ❤️Meghan

Best part…Ivanka had to sit through it

Some Twitter users found quite another meaning in Meghan McCain's words.

Love it how even the eulogy was about trump, shows how much he’s winning

Others noted that Meghan's father had his own downsides.

Oh, but he was one of many who sent soldiers to die in the unjust Iraq war, a war that has also killed millions of innocents and continued the spread American imperialism.

Actually, McCain was an opportunistic money grabber and a traitor.

Awww! like father like daughter.The venomous poison that spewed out from daddy will continue through the daughter. Pity.

The funeral ceremony for John McCain took place at the National Cathedral in Washington on September 1. It was attended by many prominent political figures in the US, such as Barack Obama, George Bush, Bill and Hillary Clinton. At the same time, Donald Trump was not invited to the ceremony.

Trump refused to recognize John McCain as a "war hero" during one of his interviews in 2016, having motivated it by the fact that the senator had been captured during the Vietnam War. McCain, for his part, opposed some of Trump's bills, including a crucial bill to drop Obamacare.

US Public Pay Tribute to John McCain on Capitol Hill