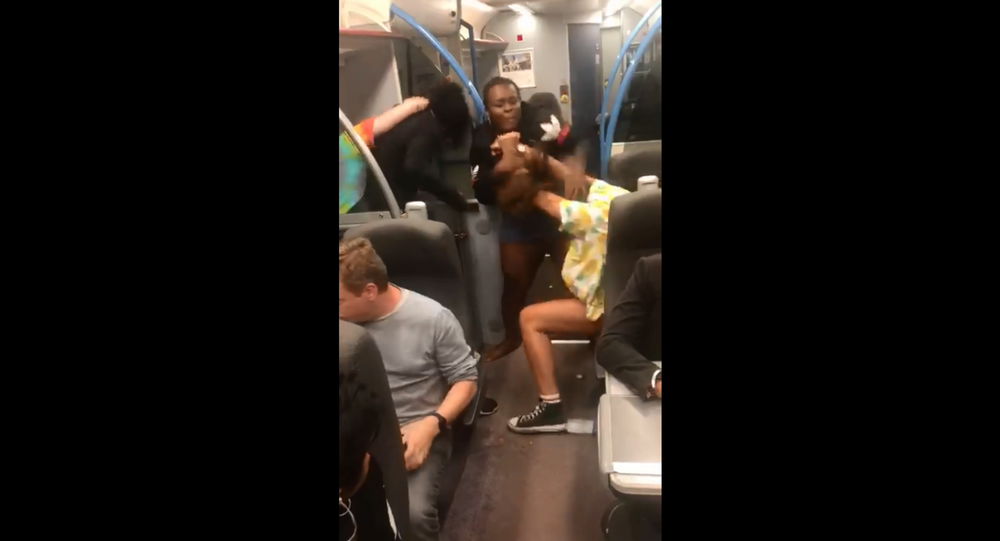 Train passengers traveling from London to Birmingham on Monday were given front row seats to a fight after a woman confronted and accused two passengers of flinging a sandwich at her.

Footage shared on Facebook by filmer Kulla Kris shows the frustrated woman in an Adidas jacket yelling at another woman and a man for the offense before all hell breaks loose on the train. The recording begins after the sandwich was allegedly fired into the battlefield.

"You were sitting like a pu**y going ‘shush, shush,' so you obviously threw the sandwich," the allegedly wronged woman yells at the pair, before focusing her attention on the woman sporting a pineapple shirt. "As I said, I will obviously punch you into next week… don't try me."

"You're throwing food like you're 10," she continued, setting off an even more intense argument about who threw the sandwich.

"Listen, I will take off my wig right now and deal with both of you right now. Don't let me take of my wig," she warned.

Seconds later, the upset commuter removes her wig and goes to town, repeatedly slapping and punching the woman she accused. A friend of the woman who was hit by the unidentified sandwich later jumps in on the action and begins to pummel the male passenger who was also accused of throwing food, violently wrestling him onto the floor.

Shocked passengers moved away from the scene, brushing past the filmer, video footage shows. The altercation lasted nearly a minute before a (likely fed up) passenger decided to intervene and separate the two women. Although the scuffle was squashed, the pair continued to argue with one another before the video cut off.

According to Birmingham Live, the British Transport Police are aware of the matter and have reached out to locals to report any information they might have about the incident to the authorities.

"We are aware of footage circulating on social media showing an assault on board a Chiltern Train," a spokesperson told the outlet. "We believe it relates to an incident which took place on a train between London and Birmingham Snow Hill at 9:50 p.m. on 27 August."

"An investigation into this incident is underway, no arrests have been made at this time," they added.

The latest brawl comes days after footage surfaced, showing two UK police officers struggling to arrest a suspect inside a Hackney McDonald's as onlookers tugged on the law enforcement in an attempt to prevent the arrest.