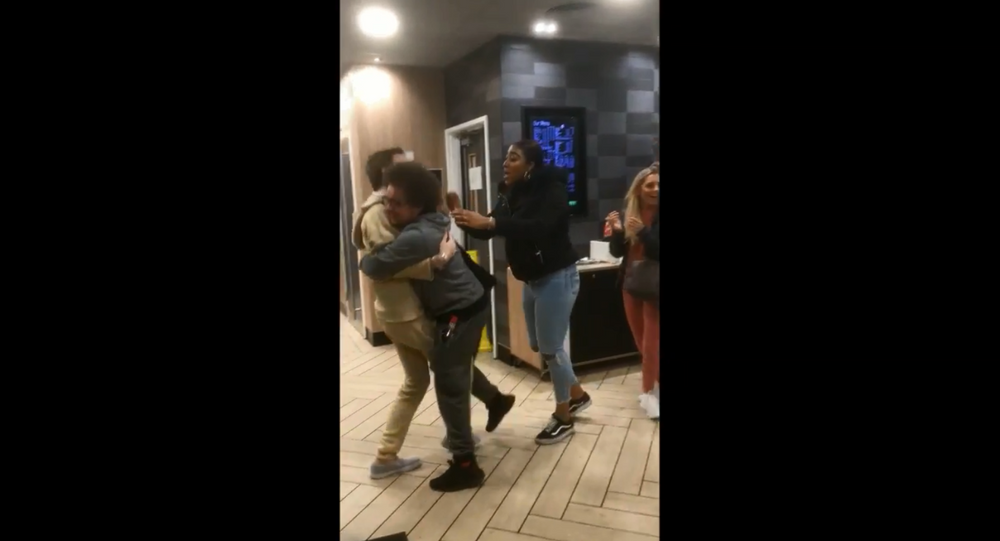 A McDonald's customer in London's Highbury Corner captured the shocking moment two fellow patons initiated a brawl with employees because there was no toilet paper in a bathroom stall.

Footage posted to YouTube on Saturday of the confrontation shows a man in a tan tracksuit yelling at restaurant staff as he's being held back by another customer attempting to deescalate the situation. The video apparently begins after the initial toilet paper complaint was made.

​Although many of the man's complaints are inaudible, he is later heard repeatedly urging the man who decided to intervene to "get off" of him, stressing that he is "chill." However, when he is released from his captor's grip, things intensify as the reportedly drunk patron flings an undisclosed object toward employees. Fed up, a worker at the establishment jumps in and pushes the customer out of the restaurant.

Screenshot/Drastic
‘I Don't Even F**king Know You': McDonald's Employee Flings Phone at Customer After Being Spat On (VIDEO)

But that's not the end of the incident. The rowdy customer's pal, a woman sporting a pink tracksuit, gets into the mix and starts to berate a McDonald's staff member for working at the restaurant.

According to Newsflare, once the lady in pink was removed from the grounds, employees locked down the restaurant and called the cops to the scene. It's unclear if any charges were filed against either customer.

​The London brawl wasn't the only one to be caught on camera recently. Video shared on YouTube on Sunday shows two women engaged in a violent altercation in which one is seen being tossed to the ground.

Unlike the scene in London, however, no bystanders appeared to intervene in the matter. Instead, the filmer is heard egging the two women on, saying, "beat her ass."

It's unclear at this time where the second brawl was filmed or if authorities were called to the scene. Both incidents came before UK police released footage on Tuesday that showed McDonald's customers trying to prevent officers from arresting a suspect.